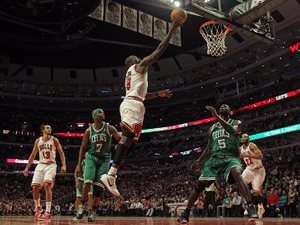 Carlos Boozer scored 23 points, pulled down 15 rebounds and handed out five assists as the Chicago Bulls again overcame the absence of Derrick Rose to outlast Boston 89-80.

Luol Deng and Joakim Noah on Thursday also had "double-doubles" for Chicago, Deng contributing 23 points with 10 assists and Noah scoring 15 points with 16 rebounds.

Chicago's fourth-string point guard Mike James also played a key role, passing out two assists in a 12-0 scoring run that saw the Bulls break out of a 69-69 fourth-quarter tie.

"Mike was amazing, showed great poise," Boozer said of the 36-year-old who was playing in the Development League last week.

Rose, the reigning NBA Most Valuable Player, missed a fourth straight game with an aching lower back.

"He's so competitive and wants to be out there so bad," Deng said. "But I keep telling him, 'You have to be smart. Don't come back unless you're 100 percent.' We're going to try to win until then."

Rose took shots at the team's morning practice but didn't do any running. He warmed up before the game but didn't play.

"He went through his workout and didn't have any problems," Bulls coach Tom Thibodeau said. "He's feeling a lot better. We want him to be pain-free. He's very close."

Rose said his back doesn't bother him when he's "just sitting around" but tightens up when he moves.

Kevin Garnett, back from a hip flexor injury, had a "double-double" of 18 points and 10 rebounds for Boston.

Rajon Rondo had 17 points and Paul Pierce chipped in 14 for the Celtics.