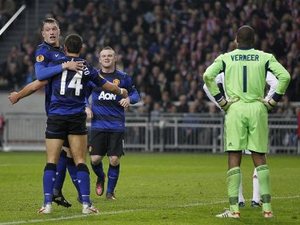 Manchester United and Manchester City shrugged off the disappointment of being dumped out of the Champions League to inch confidently closer to the Europa League last 16 on Thursday.

United defeated Ajax in Amsterdam 2-0 with Ashley Young and Javier Hernandez finding the target in the first leg of their last-32 tie.

City, meanwhile, came back from a goal down to beat defending champions Porto 2-1 with substitute Sergio Aguero grabbing the winner in the 84th minute.

At the Amsterdam Arena, United boss Sir Alex Ferguson fielded a full-strength side, but he had to wait until the 59th minute to see the opening goal struck by Young, who has only recently returned to action following a lengthy injury lay-off.

Mexican international Hernandez added the second five minutes from time to give the English champions a commanding advantage.

"It was a very ordinary performance by us. We didn't reach any great heights in the game but we did improve in the second half and we deserved to win it."

"For us to do something against Manchester, you have to really be at 100 percent, which wasn't the case tonight," he said.

"There's a difference in class between the two clubs. I don't think we're going to win 3-0 over there."

City inflicted Porto's first defeat at their Estadio do Dragao in eight European matches to take a crucial advantage back to Eastlands for the second leg.

Silvestre Varela had given Porto -- unbeaten in the Portuguese league at home since November 2008 -- the lead mid-way through the first half.

"I think that we played a good game," said City coach Roberto Mancini.

"We played very well. In the first half we had three or four chances to score and we were really unlucky. In the second half we played really well."

Stoke City were unable to make it a triple celebration for the Premier League when they lost 1-0 to Valencia at the Britannia Stadium.

Mehmet Topal scored the only goal in the 36th minute with a stunning 30-yard strike.

Spain's Atletico Madrid saw off Lazio 3-1 in Rome despite falling behind to a 19th-minute goal from German striker Miroslav Klose.

Adrian Lopez levelled before Radamel Falcao -- who lifted the trophy with Porto last season -- grabbed a brace for Atletico.

Away from the stadium, however, one Dutch fan was hurt in clashes in a Bucharest bar between rival fans.

There was also trouble in Italy when a steward was hospitalized after fans pushed over a fence before the goalless draw between Udinese and Greek side PAOK.