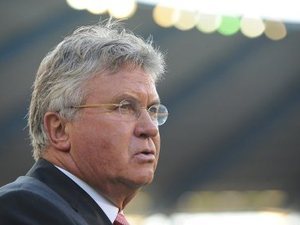 Dutch coaching legend Guus Hiddink is on the verge of signing an 18-month contract with Russia's Anzhi Makhachkala that will make him one of the world's highest-paid managers, news reports said Friday.

The Sport Express daily said the 65-year-old manager will sign a deal with tycoon Suleyman Kerimov's club after joining them in Belek, Turkey, where Anzhi are currently training.

News of Hiddink's imminent arrival at the Russian big spenders was initially reported by the Dutch daily Voetbal International, which said Hiddink would also be bringing his assistants Ton Du Chatinier and Zeljko Petrovic to the club.

Anzhi dismissed Yury Krasnozhan as manager earlier this week after less than two months in the job. The Russian Premier League is currently on its winter break and resumes in March.

Russian media reports said Hiddink would likely coach the club while Kerimov would keep tight control of transfer and other executive decisions.

Founded in 1991, Anzhi had enjoyed little success in Russian football until being acquired by Kerimov last year and going on a spending spree that landed them Cameroonian striker Samuel Eto'o and Brazilian Roberto Carlos.

Anzhi are currently seventh in the Russian Premier League with 52 points from 32 matches, 13 points behind the leaders Zenit St Petersburg.

Makhachkala, which is the capital of the restive Caspian Sea region of Dagestan, is scene of almost daily violence linked to crime and rising Islamic insurgency.

The team's players live and train in Moscow for security reasons, travelling some 1,250 miles to Makhachkala for home matches.