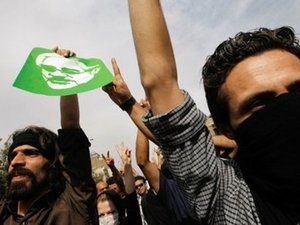 Hundreds of Iranian protesters on Monday attempted to stage scattered demonstrations in Tehran said to be in support of Arab revolts as scores of policemen moved to disperse them, witnesses said.

"They are being silent and trying to keep a low profile," a witness said about demonstrators walking from Imam Hussein Square to Enghelab.

"Some policemen are chasing the protesters away in order to disperse them," he said.

Around 1,000 anti-riot policemen were also deployed in and around Imam Hussein Square, a witness said.

Several groups claiming links to Iran's opposition movement have called for rallies to be staged in support of Arab revolts after an application by opposition leaders Mir Hossein Mousavi and Mehdi Karroubi to hold such a demonstration was rejected by Iran's interior ministry.

The foreign media has been banned from on-the-spot reporting of the gatherings.