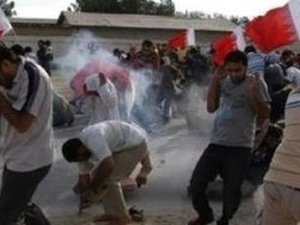 Security forces used tear gas to disperse protesters taking part in an "unauthorized" demonstration, a police official said, adding that no arrests were made.

But one man was wounded, the ministry of interior said, adding that "he was hospitalized and his situation is stable."

Witnesses confirmed that police dispersed the protests soon after they began early Monday.

In Karkazan, a Shiite village south of Manama, three policemen and a protester were injured during attempts to disperse hundreds of demonstrators taking part in an "unauthorized demonstration" on Sunday, the interior ministry said.

In a statement posted on its page on social networking site, Twitter, the ministry said that security forces "fired rubber bullets" to disperse the Karkazan demonstration.

The Facebook page which called for the February 14 uprising, inspired by similar initiatives which led to the ouster of the regimes in Tunisia and Egypt, had amassed more than 15,000 "likes" by Monday.

Shiite-majority Bahrain is ruled by the Sunni Al-Khalifa family of King Hamad, which retains a tight grip on the premiership and key ministries.

In the 1990s, it was plagued by a wave of Shiite-led unrest that has abated since 2001 reforms restored the Gulf state's elected parliament, which was dissolved in 1975, and turned the emirate into a constitutional monarchy.