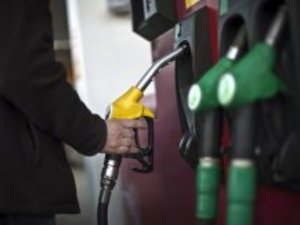 Brent North Sea crude for April delivery hit $120.70 per barrel, its highest point since June 14. It later pulled back to $119.84, down 27 cents from Thursday's closing level.

"Greater risk appetite in the light of hopes of financial assistance for Greece, coupled with the Iran crisis, have caused Brent to climb to an eight-month high of over $120," said Commerzbank analyst Carsten Fritsch.

"Admittedly, Iran has denied reports of an immediate ban on oil shipments to the EU, yet consumers in Europe already appear to be preparing themselves for just such an eventuality," Fritsch said.

"According to industry sources, the leading European oil companies have slashed their March oil imports from Iran by more than 300,000 barrels per day. This is prompting additional demand for alternative oil types and is thus causing prices to rise."

The market also gained ground on continued tension between Western powers and Iran, as well as positive economic data from the United States, analysts said.

"Ongoing Iranian tensions and the threat of disruption to oil supplies continue to be the main driver in the oil price," said VTB Capital economist Neil MacKinnon.

Israeli Prime Minister Benjamin Netanyahu accused Iran on Thursday of being the most irresponsible country in the world and said sanctions against Tehran over its nuclear drive "haven't worked."

His comments come amid growing speculation that Israel was getting closer to mounting a pre-emptive strike on Iran's atomic sites.

Tehran has been slapped with four sets of U.N. sanctions, in addition to a raft of unilateral US and EU sanctions, designed to halt a program that the West fears masks a drive for atomic weapons.

The Islamic republic denies this charge, saying its nuclear plan is for peaceful purposes.

The U.S. Department of Labor on Thursday said applications for unemployment insurance payments dropped by 13,000 to 348,000 last week.

Meanwhile, traders are also closely watching the situation in the North Sea, where output is set to fall for a third month in March due to maintenance work.