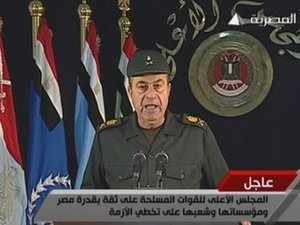 Egypt's new military regime on Monday called on workers to end a wave of strikes and civil disobedience that has threatened to paralyze the country in the wake of the fall of Hosni Mubarak's government.

In its latest announcement since it took power Friday, the Supreme Council of the Armed forces urged labor leaders to call off their action, but stopped short of issuing a decree banning them, as it had been rumored it would do.

"Some government institutions have staged protests despite life returning to normal at a time when all citizens should stand together," a military spokesman said on state television, as doctors and policemen marched in Cairo.

"Honorable citizens can see that protests at this critical time will have a negative effect in harming the security of the country," he said, arguing that strikes harm the state's ability to provide for citizens and hurt the economy.