Clinton: Time for Iran to 'Open Up', Follow Egypt 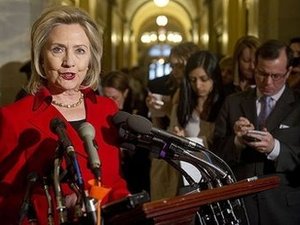 U.S. Secretary of State Hillary Clinton hailed the "courage" and "aspirations" of anti-government protests in Iran on Monday, and pressed Tehran to follow Egypt's example and "open up" its political system.

"We wish the opposition and the brave people in the streets across cities in Iran the same opportunity that they saw their Egyptian counterparts seize in the last week," Clinton told reporters during a visit to the U.S. Congress.

"We support the universal rights of the Iranian people. They deserve to have the same rights" as those demanded by Egyptian protesters "and that are part of their own birthright," she said.

She spoke after Iranian riot police fired tear gas and paintballs at protesters staging anti-government demonstrations in Tehran under the pretext of rallies supporting Arab uprisings, websites and witnesses said.

Police moved in when crowds of opposition supporters gathered in the capital's Azadi (Freedom) Square began chanting "Death to the Dictator!" -- a slogan hurled at President Mahmoud Ahmadinejad after disputed official results from a 2009 presidential election gave him a second term.

"We are against violence and we would call to account the Iranian government that is once again using its security forces and resorting to violence to prevent the free expression of ideas from their own people," said Clinton.

"We think that there needs to be a commitment to open up the political system in Iran to hear the voices of the opposition and civil society," said the top U.S. diplomat.

The anti-government demonstrations, held despite a ban on rallies, were the first in Tehran since February 11, 2010, when activists took to the streets to mark the 31st anniversary of the Islamic revolution.

There was no immediate official confirmation of opposition websites' reports of hundreds of protesters arrested in Tehran.

"What we see happening in Iran today is a testament to the courage of the Iranian people and indictment of the hypocrisy of the Iranian regime, a regime which over the last three weeks has constantly hailed what went on in Egypt," said Clinton.

"And now, when given the opportunity to afford their people the same rights as they called for on behalf of the Egyptian people, once again illustrate their true nature," she said.

"Let me very clearly and directly support the aspirations of the people who are in the streets in Iran today," said Clinton, who told reporters Washington had the same messages for Iran that it had delivered to Mubarak.

"We had three very consistent messages: We were against violence, and we stated it often, and we communicated it directly to Egyptian authorities. Secondly: We supported the universal human rights of the Egyptian people."

"And third: We stood for political change that would result in positive outcomes that would give the Egyptian people a better economic and political future. We believe the same for Iran," she said.

Many of U.S. President Barack Obama's Republican foes have sharply criticized what they viewed as his tepid response to anti-government protests in Iran in 2009 that drew worldwide attention.

At a February 10 House Foreign Affairs Committee hearing, Republican Representative Don Manzullo scolded Deputy Secretary of State James Steinberg for what he called "a message of weakness" on those protests.