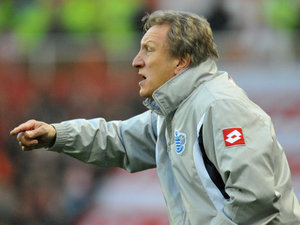 Former Queens Park Rangers manager Neil Warnock made a swift return to football on Saturday after being confirmed as the new boss of Championship side Leeds.

Warnock, controversially fired by QPR last month after successfully guiding the Londoners into the Premier League, began his reign by vowing to return the Yorkshire giants to the top-flight.

"I feel I have one big challenge left in me and believe Leeds is a club that should be in the Premier League," Warnock told Leeds' official website.

"I want to be the man who is able to deliver this for a set of fans who never cease to amaze me with their numbers and their loyalty.

"Having met with (chairman) Ken Bates it was an easy decision to take up the challenge and with his support, we share the same vision of getting Leeds United in the Premier League."

Warnock, 63, has agreed a contract at Elland Road which runs until the end of next season.

Bates meanwhile described Warnock's appointment as "arguably the most important we have made."

"The objective was to appoint a manager who had for a proven track record of getting teams promoted and in Neil we have a man whose record is second to none," Bates said.

"We want to be in the Premier League and we will support Neil in the quest to get us there."

Warnock will watch from the stands on Saturday while caretaker Neil Redfearn oversees the club's match with Doncaster.

"He's a man that can motivate us and reopen our season," Fell said.

"There's no money available so he may bring a loan player in or two - but he'll give us experience and get the most out of the players on the books, which for the last period hasn't been happening."