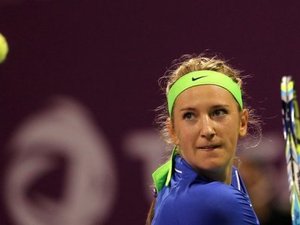 Victoria Azarenka admits that her bid to win two Middle East tournaments in as many weeks is an emotional one as the young Belarussian returns to Dubai where she nearly quit the game a year ago.

This time last year the 22-year-old from Minsk thought she would quit the women's tour after early defeats in Doha and Dubai.

But after achieving one the most astonishing turn-arounds in the modern game she returns to the region as a stunning new world number one.

Azarenka is top seed both at this week's Qatar Classic, where last year she lost in the first round to Daniel Hantuchova, and at next week's Dubai Open, where she lost second round to Flavia Pennetta, and which starts on Monday.

Those defeats plunged Azarenka into such despair that a spell of support and advice from her mother and grandmother was required to convince her not to quit.

"My mum told me to come home and rest, and not be crazy about it," she admitted. "And my gran pointed out there are things so much harder in life than tennis matches."

Now a more confident Azarenka will follow her good run in Doha with an attempt to win the title in Dubai, the $2 million tournament which has often been voted the players' favorite.

"Last year I was in a bit of a mess. I couldn't control any of my emotions. I had to change my mentality," the Australian Open champion said.

"So now I don't try to, you know, think 'why is this happening to me?' Instead I just try to accept and deal with it."

Azarenka may find herself renewing a rivalry with Petra Kvitova, the Wimbledon champion who has beaten her four times in a row, most recently in the final of the WTA Championships in Istanbul in November.

A repeat encounter between two such contrasting styles is an enticing prospect, but may depend on whether or not the flat-hitting Czech left-hander has recovered from the "unspecified" injury with which she withdrew from Doha this week.

What is certain is that Azarenka, with heavy topspin drives struck from further up the court than before, is now a more formidable opponent - physically and tactically, as well as psychologically.

"It's a great feeling to have, but also a lot of responsibility and pressure comes with it," she says of her rise to number one.

"I worked really hard to achieve this and I enjoy this position, but I have to remember to still work hard, because there are a lot of girls behind me who want to chase me and be at my spot."

One of them is Caroline Wozniacki, whom Azarenka deposed as number one last month. The Dane followed a disappointing Australian Open with a painful first round defeat in Doha, which may make her dangerous next week as a wounded creature can be.

However Wozniacki may get a lift from happy memories, for she is defending champion in Dubai. She also appeared to receive words of support from Azarenka, her friend and neighbor in Monte Carlo.

"Whatever people say, I appreciate if I'm a legit number one, but I think they shouldn't be too hard on the other girls, as well," Azarenka said, apparently referring to the constant criticisms of Wozniacki's status as number one throughout 2011 without having won a Grand Slam.

Another seeking to become a force again is Samantha Stosur, who has shown signs of regaining form and fitness in Doha this week - an unexpectedly rare occurrence since the Australian's capture of the US Open title in New York in September.

There are other potential title challengers too and, with 16 of the world's top 20 on the entry list, Dubai has one of the strongest fields outside a Grand Slam tournament.

French Open champion Li Na of China has however withdrawn from the tournament because of a back problem which forced her out of the WTA Paris Indoor Open over a week ago. Li had been seeded eighth in Dubai.