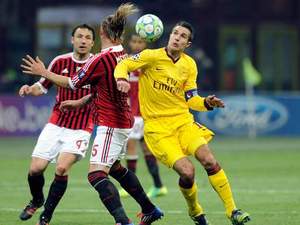 Van Persie's side were thrashed 4-0 by Ibrahimovic's Milan in the San Siro on Wednesday, to effectively end the London club's Champions League hopes.

The Dutch international has almost single-handedly kept Arsenal afloat this season and Ibrahimovic warned that if he wants to win anything, he needs to leave London, just as Barcelona's Cesc Fabregas did last summer.

"When you don't win anything for years, people understand why you leave like Cesc Fabregas," the Swede told The Sun.

"Football is all about winning. If you don't win you want to go. I don't know Robin personally but I remember him from Holland and what a talent he was - now he is complete.

"I don't know what he is thinking but I know what I would do.

"I have made a lot of moves in my life - I take it as a challenge, an adventure.

"And I have won eight titles in eight years with different clubs in different countries.

"But if you stay in one place all your life it is easy to play football.

"You are at home, you are in the comfort zone.