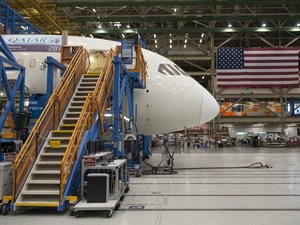 U.S. President Barack Obama said Saturday his administration was headed toward fulfilling its commitment of doubling U.S. exports over five years and promised to reward businesses that created jobs at home with tax breaks.

"Two years ago, I set a goal of doubling U.S. exports over five years," the president said in his weekly radio and Internet address. "And we're on track to meet that goal - ahead of schedule."

The comments came after Obama visited a Boeing manufacturing facility in the northwestern state of Washington, which he hailed as an example of revitalized industry.

At the end of a three-day tour that focused on U.S. industry and fundraising for his November reelection bid, Obama promised not to stand by when U.S. competitors don't play by the rules, and benefit from what he called "unfair" trade practices.

In a cavernous Boeing hanger, Obama praised the company's new Dreamliner aircraft, which made its first commercial flight in October and is now getting a string of orders from around the world after years of delays that cost the firm billions of dollars in lost or delayed orders.

The president repeated his praise of Boeing in his address, holding up the company as an example of a competitive business.

"Companies like Boeing are realizing that even when we can't make things cheaper than China, we can make things better," Obama said. "That's how we're going to compete globally."

The president also said he was against giving tax breaks to companies that ship out American jobs to other countries.