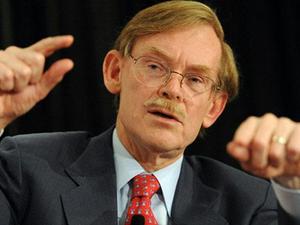 The World Bank said Friday it would select a new president to succeed Robert Zoellick by April 20, the start of the World Bank and IMF's spring meetings in Washington.

But even as the huge development lender set out what it said would be "a merit-based and transparent process" to choose its 12th head from among candidates from around the world, it appeared all but certain to be filled by an American.

Zoellick announced Wednesday he would step down at the end of his five-year term on June 30.

The World Bank said nominations will be accepted through March 23; candidates can come from any of the Bank's 187 member countries.

A shortlist of up to three candidates will be selected for interviews by the Bank's executive directors, "with the expectation of selecting the new president by consensus by the Spring Meetings of 2012," the bank said in a statement.

The board "reconfirmed the importance of a merit-based and transparent process with all executive directors able to nominate and then consider all candidates."

"The executive directors expressed their deep appreciation to President Zoellick for his leadership of the World Bank Group and its very significant accomplishments during his tenure," it added.

Zoellick's departure sets up the second battle in less than a year over U.S. and European dominance of the World Bank and the IMF, the world's two leading multilateral financial institutions.

Under a tacit agreement between European powers and the United States dating to 1945, all 11 Bank presidents have been Americans and all International Monetary Fund managing directors have come from Europe.

But calls have mounted for a change to the arrangement.

After IMF chief Dominique Strauss-Kahn's sudden resignation last May, strong pressure arose from emerging economies to name a non-European to lead the Fund.

In the end, backed by the leading economic powers French finance Minister Christine Lagarde was chosen over several non-Europeans.

The United States, as the biggest stakeholder, is seen as unlikely to allow a non-American hold the Bank job, in part due to concerns that Congress would hold back funding in protest.