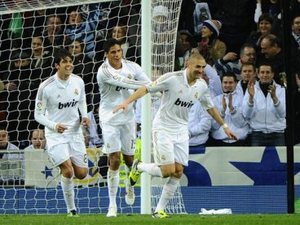 Real Madrid went 13 points clear of Barcelona in La Liga on Saturday as Karim Benzema grabbed a double in a 4-0 win over 10-man Racing Santander.

Jose Mourinho’s men have given Barca little margin for error having now won 18 of the last 19 games since they drew 0-0 at Santander at the end of September.

On Saturday, they weren’t very forgiving towards Racing as they stayed on track for their first league title since 2008.

"It was not a brilliant performance, but we won without too much effort and it was a good result," said Mourinho.

A Cristiano Ronaldo header hit the post as Real came out all guns blazing and after six minutes they were a goal up with Kaka crossing for Ronaldo to head in from less than a yard out for his 28th league strike of the season.

Real were given a further boost by the harsh dismissal of Domingo Cisma after 38 minutes when he was adjudged to have handled the ball.

On the stroke of half-time Benzema doubled the lead when he clipped the ball in from an acute angle and after the break Real remained firmly in control.

Xabi Alonso had a shot from the edge of the area which went narrowly past the post before substitute Angel Di Maria, returning from injury, hit a shot into the back of the net although goalkeeper Antonio Rodriguez perhaps should have done better.

Benzema completed the rout with a deflected strike a minute from the end.

Mourinho said he was happy to see Di Maria as well as Sami Khedira return to the side particularly with Champions League matches on the horizon.

"They have come back at the right time and especially Di Maria gives us options which we lacked when he was injured in terms of winning the ball back and attacking. It's good to have Khedira available now we are starting to play every three days."

Barcelona, who tackle third-placed Valencia on Sunday, return to La Liga action after a 3-1 victory at Bayer Leverkusen in the Champions League and keeper Victor Valdes says that they need to continue the form they showed against the Germans.

The Catalan side have a difficult home clash against Valencia but it is their performances away from the Nou Camp, where they have won only four from eleven matches, that have given them a mountain to climb if they are to retain their title.

"Our Champions League progress is the path we need to follow in the league. It was an important match for us to win against Leverkusen because they were difficult opposition," said Valdes.

"We cannot relax, we need to keep believing in ourselves and the results will follow. We still believe that we can win the league but we have to go match by match.

"We are in the final of the King's Cup and we hope to retain the Champions League trophy. Other teams know us better now, so maybe that is one of the reasons why we haven’t done so well away from home."

Espanyol moved into fourth place despite being held 1-1 by mid-table Getafe.

Jose Miguel Gonzalez ‘Michel’ had his first victory as Sevilla coach with his side beating Osasuna 2-0 with goals from Gary Medel and an injury time strike from Piotr Trochowski.