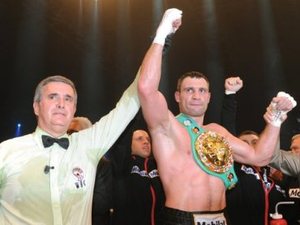 Vitali Klitschko unanimously out-pointed Dereck Chisora for a 10th successive defense of his World Boxing Council (WBC) heavyweight title in a stormy clash at the Olympiahalle on Saturday.

After being slapped by Briton Chisora at Friday’s weigh-in, Ukrainian Klitschko got revenge over his provocative challenger but he spent a lot of the fight on the back foot before earning scores of 118-110, 118-110 and 119-111 from the judges.

"He was very motivated. It was not easy but I saw every punch, he was slow. I am upset because I wanted to finish the fight before the 12th round," said Klitschko.

The Briton said: "The only thing that beat me tonight was experience. I don't hold back. I keep coming and I want a rematch."

Despite the wide margin of the scores, Klitschko's 40-year-old legs were made to work for every moment of the 12 rounds in a plucky effort from Chisora.

Klitschko won the title in 2004 but ‘retired’ later that year through injury only to resume his untroubled reign four years later.

Like all the other younger challengers who have stepped up to face the 6ft 7in Ukrainian, 6ft 1in Chisora fell short but he did give Klitschko some worrying moments.

Germany-based Klitschko improved his record to 44 wins, and two losses with his 41st stoppage while Zimbabwe-born Chisora, who moved to London aged 16, suffered his third defeat in his 18th fight.

It means all the world title belts remain in Klitschko hands, with Vitali’s younger brother Wladimir owning the other three.

Chisora, 28, had lost his previous fight -- controversially on points to Finland’s Robert Helenius for the European title in December -- but his aggressive start showed the Briton had bad intentions for Klitschko and was not intimidated, unlike a lot of Vitali’s previous challengers.

Chisora climbed through the ropes to a chorus of boos from 13,000 German fans who had turned up to see Dr Ironfist for one of the last times in his career.

The challenger had hardly endeared himself to the locals by slapping their hero at Friday’s weigh-in and there were more antics from Chisora moments before the fight.

Chisora continued to upset by Klitschko by threatening to pull out of the fight an hour before it started.

Vitali’s younger brother Wladimir -- the IBF, WBA and WBO champion -- asked for Chisora’s hand wraps to be reapplied and the challenger initially objected.

The row was eventually resolved and the fight delayed but Chisora’s outrageous antics were not over.

Chisora got in Vitali’s face as soon as the champion climbed through the ropes and then spat water in Wladimir’s face which may earn him another fine from boxing authorities.

Despite the wind-ups Klitschko, who won the belt in 2004 only to retire later that year through injury before making a comeback in 2008, still made a reserved started.

Chisora marched forward in the second round but got caught by a right on the temple before landing a short right hook of his own.

So many of Klitschko’s fights have been one-sided but Chisora made the early rounds competitive.

Klitschko, who was six inches bigger, began having success with the right over the top but it did not discourage Chisora from walking on to the champion.

Klitschko refused to let his hands go, no matter how provoked he had been, and preferred to build up a comfortable points lead by the halfway mark.

Chisora kept pressing and in the sixth landed a good right on the counter attack before making a furious start to the seventh with another big right.

But Klitschko was in command again by the ninth and his jarring jab ensured he continued to rack up the points before avoiding any big shots in a furious finish from Chisora.

Klitschko, who spends more time on his political career in the Ukraine than boxing, declared that after fighting Chisora he would have one more fight before considering hanging up the gloves.

Another Briton, David Haye, would be Klitschko’s choice but the former WBA champion, who lost his belt to Vitali’s younger brother Wladimir in the summer, has not agreed to the terms being offered for a summer showdown.