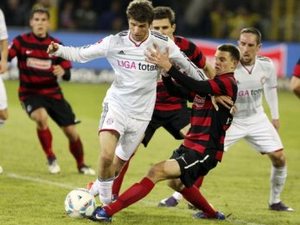 Bayern Munich's director of sport Christian Nerlinger admitted he was "mystified" by his team's first-half performance in the goalless draw at bottom side Freiburg which saw them slip to third in the German league.

Even Bayern coach Jupp Heynckes said Bayern's performance in the opening 45 minutes was "sluggish" as the Bavarian giants came off second best to a spirited Freiburg team who are threatened with relegation.

The draw leaves Bayern four points behind leaders Borussia Dortmund with Moenchengladbach second and Nerlinger admits the title race is currently out of their hands.

"I’m mystified by this performance," admitted Nerlinger."The first half in particular has left me very pensive. It seemed as though a few of the players haven’t grasped what’s at stake.

"We lacked basics like aggression, attitude and work-rate. If you compare the two teams in terms of individual class, it’s a game Bayern should have won. Obviously, we’ve not lost the title yet, but it’s no longer in our own hands."

With Freiburg in the thick of the relegation battle, the hosts fought and chased every ball and they showed far more desire than Bayern, who are at FC Basel on Wednesday in the Champions League Round of 16 first-leg tie.

"We were sluggish in the first half," admitted Heynckes. "We obviously thought we’d succeed with pretty football.

"What we should have done is resist energetically, we should have matched their approach, picked up the pace, but we didn’t do that until the second half, when we applied pressure and made a few chances.

"That's what you have to do for 90 minutes against a team fighting for their lives.

"In terms of the table, it’s two points dropped. The teams at the top are very stable, so normally, you can’t allow yourselves the kind of lapse we’ve suffered here."

While Bayern have won just two of their five league matches in 2012, Dortmund picked up their sixth straight league win with a hard-earned victory 1-0 against a Hertha side just above the relegation places.

The leaders' only goal came when a bullet header from Dortmund striker Robert Lewandowski was parried by Hertha goalkeeper Thomas Kraft with winger Kevin Grosskreutz on hand to hit an over-head shot on 66 minutes.

Victory came at a cost as Dortmund defender Mats Hummels had to come off after developing a fever during the match, while midfielder Lukasz Piszczek suffered a concussion.

Berlin's Olympic Stadium was a 74,244 sell-out for the game which saw Dortmund play without injured Japan winger Shinji Kagawa and coach Jurgen Klopp starting Lucas Barrios as the lone striker.

"That was really hard work, the pitch was greasy and it was difficult to control the ball," said Klopp.

"I was thrilled by the will and attitude of the team. I think we deserved the win."

Hertha, who sacked coach Michael Skibbe last Sunday after five straight defeats, remain 15th in the league and Otto Rehhagel, who led Greece to the Euro 2004 title, will take over on Sunday.