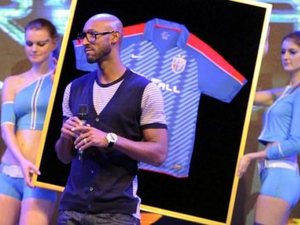 Shanghai Shenhua are hoping new signing Nicolas Anelka can revolutionize Chinese football, but he will first have to find his feet in a country where foreign players have struggled to settle.

The former Chelsea striker -- the Chinese league's most high-profile signing to date -- follows in the footsteps of a slew of foreign imports to China including Paul Gascoigne, Hamilton Ricard, Carsten Jacker and Paul Rideout.

But few have lasted more than a few seasons. Some have not even made it through one -- New Zealand and Gold Coast striker Shane Smeltz lasted just a day before deciding the northern industrial city of Jinan and its team, Shandong Luneng, were not for him.

"I like the mentality in China and in Asia. I had other offers, but that is why I chose to come here," Anelka told journalists at a packed news conference on Thursday.

"Chinese football is very new for me, I have not yet been able to assess it because I haven't played any Chinese teams. I hope that I can give some positive ideas to the other players."

Anelka -- who is reportedly earning up to 234,000 euros ($307,000) a week at Shanghai Shenhua -- does not have long to acclimatize with the start of the Chinese Super League less than a month away.

Ireland's Don O'Riordan, head coach of Chinese second division side Beijing Baxy's women's team, says the Frenchman's status as a top professional will quickly rub off on his new team-mates.

"For the Chinese players at Shanghai to get the opportunity to train and play with someone like Anelka who has been coached by some of the top coaches in world football is a fantastic chance," says O'Riordan, who played for Preston, Grimsby and Carlisle.

"He will always train properly, giving 100 percent every time, and show the professional way of doing things to those who are willing to listen, watch and learn."

It is too early to tell how English football's famous misfit, nicknamed "Le Sulk" for his attitude, will adapt to his new life in China's commercial capital.

Wing Chan, director of residential services at CB Richard Ellis Shanghai, believes the 32-year-old may face the toughest challenge off the pitch.

Wing, who helps newly arrived multinational executives and their families settle in Shanghai, says much will depend on whether Anelka brings his wife and two sons with him to the city.

"Shanghai looks modern on the outside, but underneath it's different -- things like the housemaid using the same cloth to clean the floor and the dishes is just one little issue which might rankle," she says.

In his first few days, Anelka has been fiercely protected by Shenhua, who did not even disclose the date of his arrival to ensure he would not be mobbed by fans at the airport, as has happened to foreign players in the past.

For now, the player is staying in The Peninsula -- one of Shanghai's swankiest five-star hotels. Shenhua say he will move into a luxury private villa but have not revealed its location.

Chan points out that Anelka will have the added pressure of public attention on top of dealing with all the usual issues faced by expats moving to China.

"Children are relatively easy to keep happy after relocation, but it's the spouse who is usually the problem," she said.

Even for players who travel solo, China can be tough -- Gascoigne moved to China in 2002 but stayed for just a few months in the remote and notoriously polluted western city of Lanzhou.

In his autobiography, the troubled former England star recalls how the eight-hour time difference made it difficult to speak to his friends in Britain.

Unable to speak the language, Gascoigne grew so bored and restless he decided to try to fish for Koi carp using Jammie Dodgers -- a well-known British biscuit -- as bait.

The busy, cosmopolitan city of Shanghai, with its designer shops and top-class restaurants, is a far cry from Lanzhou.

Jorg Albertz, a former German international and once of Rangers, lasted two years with Shenhua, and says he enjoyed his time in the city.

But his stint coincided with a major corruption scandal in China's football league, and he recently told the BBC he suspected some games he played in were fixed for gambling purposes.

"I kept my mouth shut and made the decision to leave the country," he said.

"At the end of the day if you are giving 100 percent for your club and you know maybe there are some players who are not performing that well... you want to have success."

Nevertheless, many members of Shenhua's Blue Devils supporters group still wear shirts bearing Albertz's name, after he helped the club to win its last championship in 2003.

Anelka can expect a wild and frenzied welcome from the Blue Devils, who model themselves on the "ultras" of Spain and Italy, but not all fans are prepared to offer unreserved support.

"I'm worried if he can see out his two-year contract, as we know he has a reputation for being arrogant and having a bad temper," says Ben Li, a 27-year-old Blue Devil.

"I'm not sure why he chose to continue his career in China, if his team-mates can't cooperate with him and offer him enough support, he might become frustrated and want to leave."