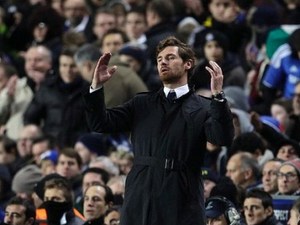 Andre Villas-Boas insists he still has the full backing of Chelsea owner Roman Abramovich despite his side's recent slump.

The pressure on Villas-Boas's position increased when his side were unable to overcome Championship club Birmingham City in the FA Cup fifth round tie at Stamford Bridge.

The 1-1 draw came after last weekend's Premier League defeat at Everton, a result that prompted to call his players in for a clear the air meeting and extra training on their day off.

Abramovich also attended that meeting but if the club owner and manager hoped for an immediate reaction, they were disappointed.

David Murphy gave Birmingham a 20th minute lead and it took a second half header from Daniel Sturridge to earn a replay for Chelsea after Juan Mata had missed a first half penalty.

Villas-Boas admitted his team is short on confidence ahead of Tuesday's Champions League visit to face Napoli but claims he is not at risk of the sack.

Asked if the outcome of the Napoli tie would have any bearing on his future he said: "No. No, not at all."

"It's not up to me to decide that, you have to ask that question to the right person," he said.

Villas-Boas was in no doubt, however, Chelsea's display against Birmingham wasn't up to the standards expected at the club.

"It was not good enough, for sure it wasn't. We were better in the second half but didn't have enough opportunities to win. And I would never say it is fine when you draw to a Championship team," he said.

"It took us too long to find our level and they had opportunities to go on and score the second."

Admitting his squad's self-belief had taken a battering recently, he added: "The situation is we don't have enough good results for us to feel a bit strong.

"But we are still in these competitions and will continue to push for them. It will be a difficult game against Napoli but we have shown in the group game we can overcome adversity."

Chelsea's cause will not be helped in Italy if Ashley Cole and John Terry fail to recover from the injuries that kept them sidelined against Birmingham.

"Both Terry and Cole are in with a chance of making it. Hopefully we will have Ashley training tomorrow. Terry is very, very doubtful but we will take him anyway," he said.

"He wants to play but is struggling with his knee injury. It's a 50-50 chance. He trained with us 100% two days ago, the following day he couldn't train. So we will take him to Napoli and make a decision."

Fernando Torres was withdrawn at half time after another poor display and watched the second half in the dressing room.

"It was a decision we had to make. We were going more direct in the second half and we wanted to up the tempo. And we made that decision because of Didier Drogba acting as a target man," he said.

"I'm sure he didn't take it lightly but we took it for the benefit for the team.

"He is a super talent of world football and as the team wins he will gain more confidence and as Fernando gets back to his goals he will get back his confidence."

Birmingham manager Chris Hughton hailed his side's performance as the best in a season that included a Europa League campaign.

"I'm absolutely delighted, not just with the result but the performance. Over the 90 minutes we were able to offer a threat as well as contain them," Hughton said.

"It was our best performance of the season. We've had some highs in the Europa League but given it was a Premier League team and the level of performance I think it is.

"At 1-1 you would think the emphasis of the game would swing their way but arguably the best chance towards the end fell to Nathan Redmond."