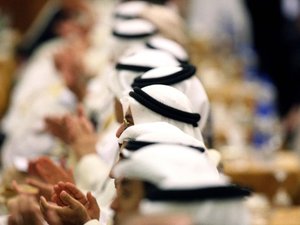 OPEC member Kuwait was forecast Sunday to post its largest revenues and budget surplus ever this current fiscal year on the back of high oil prices and production, a local economic report said.

Oil income is forecast to contribute around 95 percent of the revenues, according to NBK which said the average price for Kuwaiti oil will be about $109 a barrel way above the budget price of $60 a barrel.

Kuwait, which ended the past 12 fiscal years in surplus amassing over $200 billion, will also post a record windfall topping $41 billion at the end of 2011/2012 year, NBK said.

The emirate has been pumping around 3.0 million barrels per day, even when its OPEC output quota was just 2.2 million bpd.

Based on official figures, the Gulf state posted revenues of $77 billion in the first three quarters of the fiscal year, up a massive 41.7 percent a year ago, with almost all the increase coming from oil.

As the income rose sharply, spending also increased at a fast pace, tripling in the past six years to around $70 billion.

The governor of the central bank of Kuwait Sheikh Salem Abdulaziz Al-Sabah quit earlier this month in protest at the rapid growth in public expenditures.

The sharp increase in spending has caused alarm that the emirate, which has a native population of 1.17 million, could face serious consequences if oil prices crash as they did in 2008.

The Gulf state adopts a cradle-to-grave welfare policy where a majority of citizens are employed by the government, receive handsome salaries, pay no taxes and receive services at low charges or for free.

Under Kuwaiti law, 10 percent of revenues are deducted every year to go into the emirate's sovereign wealth fund. Returns on the fund are not included in the budget.