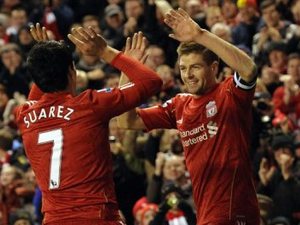 Liverpool manager Kenny Dalglish is keen to see Steven Gerrard, Luis Suarez and Andy Carroll play together on a regular basis after they all featured in the FA Cup thrashing of Brighton.

Despite Suarez and Carroll arriving at Anfield in January last year, the trio started together for the first time in the 6-1 fifth round home win Sunday.

Both Gerrard and Carroll have struggled with injuries, while Suarez only recently returned from an eight-match ban for racially abusing Manchester United's Patrice Evra.

They had been restricted to just 69 minutes together on the pitch before the Cup tie but they showed just how prolific they can be by helping the Reds to their biggest win since Dalglish returned to the club 13 months ago.

"Someone said they'd played 69 minutes before so I assumed they must have started somewhere," said Liverpool great Dalglish.

"The more anybody or any team gets the players that are iconic like they are on the pitch, the better chance they’ve got of being successful.

"But we've got more than three players and the fact that we've done as well as we have and that's the first time they've (all) started a match tells you how well the rest of the boys have done as well.

"We'll stand and be counted as a squad and I don’t think we’ve done too badly this year," added Dalglish, who will take his side to Wembley next weekend to play another second-tier club in Cardiff in the League Cup final.

Carroll's goal against Brighton, which helped set up an FA Cup quarter-final at home to Stoke, was just his eighth since his £35 million ($55 million) move to Anfield from Newcastle 13 months ago.

But Dalglish maintains he has never been swayed by the criticism the striker has received since his expensive transfer.

"We've always been positive and we always will be and we'll always be supportive of any player that comes to this football club.

"It doesn’t matter what his name is, we'll judge him and we'll judge whether we're happy or unhappy."

Dalglish revealed Craig Bellamy and Daniel Agger had pulled out of the squad in the days running up to the game at Anfield.

But he is hopeful that the pair will be available to play against Cardiff.

"There are no injuries from the game as far as we know but we had a couple on Friday and Saturday with 'Bellars' and Daniel Agger," said Dalglish. "We'll just have to see how they are but they should be alright."

Carroll added a third before further own goals from Bridcutt and Lewis Dunk and a Suarez header, after he had missed a penalty, completed the scoring.

It was Brighton’s first defeat of 2012 and manager Gus Poyet hoped it would be a valuable lesson for his players.

"People are talking about promotion and things and I said I want to be ready and we are not," Poyet explained. "People think I’m being negative but maybe now they will say I was right.

"I learned a lot and I hope they did the same because if they want to play in the Premier League as a team or as individuals they know what it takes now."