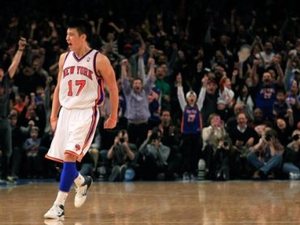 Just two days after committing a season-high nine turnovers in a loss to New Orleans, the 23-year-old Lin bounced back in superb fashion against the mighty Mavericks.

"We are thankful for any win we can get but obviously this is a big one because they are defending champions," Lin said.

Point guard Lin finished with a team-high of 28 points, 14 assists and five steals for the Knicks who beat Dallas for the first time at Madison Square Garden in over six years.

Center Tyson Chandler finished with 14 points and 10 rebounds and shooting guard J.R. Smith had 15 points in his first start of the season for the Knicks.

Veteran Smith signed with New York Friday after a stint playing in China.

Lin said teams are trying to make it harder on him on offence by double-teaming him.

"I am being aggressive and trying to learn from my mistakes," he said. "They are double-teaming me on the pick and roll. It is a good opportunity to distract the defense."

The Lin era got its launch when the former part-time player was called upon with two starters missing and the Chinese-American star answered with the most points of any NBA player in his first five starts since the NBA and ABA merged in 1976.

Lin's fairy-tale rise to fame is further enhanced because he was cut by two clubs before the season started.

Once again, Lin drained long three pointers, made precision full court passes and spun off defenders to attack the Mavericks' basket as he carried the Knicks on his back down the stretch in the fourth quarter.

Lin shot 11-of-20 from the field in 46 minutes of playing time. He also limited his early turnovers making just one in the first half as the Knicks led 48-45 at the half. Lin finished with seven turnovers but he more than made up for it with a trio of three pointers on six attempts.

In the final minute alone, he assisted on the Knicks' last two baskets and had a clutch steal against reigning NBA finals MVP Dirk Nowitzki of Germany.

Earlier in the fourth quarter, Lin hit a three pointer over the seven-foot Nowitzki that made it 90-81, giving New York one of their biggest leads of the game.

The 46 minutes of playing time is a season high for Lin, who says he works closely with the training staff to keep his energy level high.

"It has only been two weeks but our staff does good job keep my legs fresh," Lin said.

Nowitzki scored a game-high 34 points and Shawn Marion, who was given the task of guarding Lin, had 14 points and seven rebounds for the Mavericks, who had their six-game winning streak snapped.

New York had its season-high seven-game win streak come to an end with Friday's loss to the Hornets as Lin suffered his first defeat as a member of the starting squad.

Lin, who is averaging 22.5 points and 10.2 assists in his past five games, welcomed the addition of Smith.

"J.R. gave us a lift," Lin said. "We are going to continue building this chemistry so we can move forward and continue to win games."

The Knicks played their seventh-straight game without superstar Carmelo Anthony who is out with a groin injury.