Milan Back on Top after Cesena Stroll 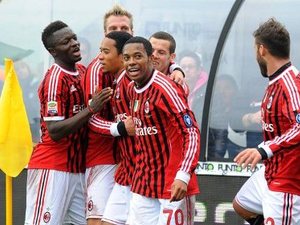 AC Milan stormed back to the top of Serie A with a 3-0 win at lowly Cesena on Sunday as they made light of the absence of Zlatan Ibrahimovic.

In two games since the big Swede has been suspended for slapping Napoli's Salvatore Aronica, Milan have won.

Ghana midfielder Sulley Muntari, on his debut, and versatile Dutchman Urby Emanuelson both scored their first goals for the club with Robinho adding the third as Milan went a point clear of Juventus, although having played a game more.

The two Italian giants meet next week in a top of the table clash at the San Siro.

Juventus had taken over at the summit on Saturday with a 3-1 win over 10-man Catania.

"He did well today, not just with the goal but also in getting the ball forwards, we've made a great signing," he told Sky.

"I don't know why Inter weren't using him, we looked at the situation and it's a comfortable one for us. When he was at Udinese he had his best season but maybe he left too young (to go to Portsmouth).

"I thought he would have a different career. Sometimes people make mistakes in the moment but you can see that the quality is there."

Milan were quick out of the blocks and could have had three goals inside the first 10 minutes.

Muntari turned smartly in the box from Ignazio Abate's deflected cross but shot just past the upright.

Francesco Antonioli then tipped over an Emanuelson shot from distance before the two Milan midfielders combined to put in captain Massimo Ambrosini one-on-one but the goalkeeper saved with his legs.

Robinho almost caught out Cesena when nipping onto a deflected cross but he headed wide.

The breakthrough came on 29 minutes as Thiago Silva thumped a free-kick goalwards that Antonioli spilled, allowing Muntari to nip in and score.

And just two minutes later Emanuelson countered with Robinho before cracking in a low shot from outside the post inside the corner.

Cesena did create a pair of chances but Christian Abbiati tipped over Vincenzo Iaquinta's header while Adrian Mutu headed over from six yards.

And 10 minutes into the second period it was game over as Robinho took a pass from Abate, surged between two defenders and finished into the far corner for his third goal in a week.

Iaquinta had a couple more chances but couldn't find the net while Milan substitute Stephan El Shaarawy went through one-on-one with Antonioli but was denied by the goalkeeper.

Udinese took over third place -- the final Champions League qualifying position -- despite being held to a 0-0 draw at home by Cagliari.

That was because Lazio crashed to a humiliating 5-1 thrashing at Palermo to continue their poor run in 2012, losing six of their 11 games in all competitions.

Palermo's win moved them into striking distance of the European places.

The game was over by half-time as goals from Edgar Barreto, Massimo Donati and Matias Silvestre had the hosts in total control.

Roma moved up to fifth and sent Inter Milan, who lost 3-0 at home to Bologna on Friday night, down to seventh with a 1-0 win over Parma.

Lecce came from a goal down to beat Siena 4-1 to boost their hopes of beating the drop this season.

Lecce remain two points from safety but with Siena the team occupying the final survival position it was a crucial success.