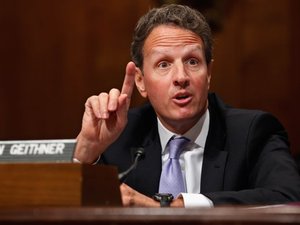 U.S. Treasury Secretary Timothy Geithner has thrown Washington's support behind the new austerity measures agreed by Greece and said the U.S. backed the idea of a new IMF loan for Athens.

"We welcome the program of economic reforms agreed to by the prime minister of Greece and the coalition parties, and the public statement of support from the major economies of Europe," Geithner said in a statement Sunday.

"This is a very strong and very difficult package of reforms, deserving of support of the international community and the IMF. The United States will encourage the IMF to support this agreement."

Eurozone finance ministers could finalize the deal in Brussels Monday in a bid to try to save Greece -- which has already been granted a 110-billion-euro rescue package -- from bankruptcy.

The International Monetary Fund, which in May 2010 gave Greece a 30-billion-euro loan as part of the first bailout, has remained silent in recent months on the idea of a new loan.

Its member states are divided on whether to continue financing a country that has not respected its financial commitments. The United States is the largest shareholder in the Fund and has enough votes to block any decision.

The Wall Street Journal has reported that the IMF is planning to contribute 13 billion euros within the context of a new international bailout package.

In a separate article Monday, The Journal said that the IMF now expected Greece's debt to stand at 129 percent of the country's gross domestic product in 2020.

Citing unnamed people with direct knowledge of a draft debt-sustainability analysis put together by the fund, the newspaper said that the options envisaged by the IMF include allowing Greece to capitalize accrued interest on the bonds now held by private creditors.

These bonds are set to revert to the Greek government under a massive debt swap, under which investors will receive new bonds worth only half as much value, the report said

The second option is to cut the interest rate on an existing 110-billion-euro bailout loan, the Journal noted.

The third option, according to the paper, calls for asking Eurozone central banks to tender the Greek bonds they hold as investments -- estimated at around 12 billion euros -- in the debt restructuring.

Under the fourth option, the European Central Bank would forego the profit it would otherwise make on around 45 billion to 50 billion euros in Greek bonds it bought in the open market in 2010-2011, The Journal said.

Greece's debt-to-GDP ratio for 2011 is now estimated at 164 percent, up from 162 percent, according to the report

"The IMF is looking for a combination of the options that would lead towards the 120-percent debt-to-GDP target by 2020," The Journal quotes one of its unnamed sources as saying. "But it's not known how many of those options will be adopted by the finance ministers on Monday."

IMF Managing Director Christine Lagarde told senior fund executives Friday that it is imperative for all lenders -- private banks, Eurozone governments, Eurozone central banks, the ECB and the IMF -- to be involved in slashing Greece's debt, the Journal reported.