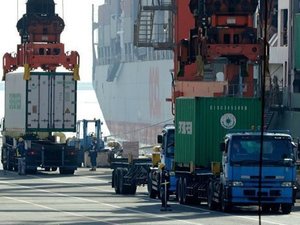 The January deficit came in at 1.475 trillion yen ($18.5 billion), the highest since records began in 1979, the finance ministry said.

The record figure comes after Japan registered its first annual trade deficit in 31 years in 2011, and triggered warnings that the country was likely to see more negative figures throughout the year.

The January statistic was more than triple the year-before shortfall of 479.4 billion yen and far exceeded the previous monthly record of 967.9 billion yen in January 2009 during the global financial crisis.

It was the fourth straight monthly deficit but in line with a 1.468 trillion shortfall forecast in polls by Dow Jones Newswires and the Nikkei business daily. The Nikkei 225 index closed the day 1.08 percent higher.

Japan's overall exports tumbled 9.3 percent to 4.510 trillion yen last month because of lower shipments of semiconductors and other electronic devices.

"We expect this trend of deficit to continue until early 2013" with demand for fossil fuel power generation staying strong while the slow global economy and the high yen hurt exports, said Barclays Capital economist Yuichiro Nagai.

Demand for fossil fuels has surged in Japan after the March 11 earthquake-tsunami disaster sparked the world's worst nuclear accident in 25 years, leading the government to take many atomic reactors offline.

Satoshi Osanai, economist at Daiwa Institute of Research, said "the trade deficit is likely to continue" for the time being, adding that Europe's debt woes have also dealt Japan a blow.

"The U.S. economy is underpinning (Japanese) exports, as seen in higher U.S.-bound shipments of automobiles, but demand from Europe is weak," he said.

European demand has slumped owing to the region's debt crisis, which threatens to plunge the global economy back into recession.

With the Middle East, the source of most of Japan's oil, the deficit rose 13.6 percent to hit 988 billion yen, while the shortfall with Australia, another key energy source, was 20 percent higher at 298 billion yen

Japan's purchases of LNG from the Middle East rose more than 60 percent by quantity and nearly 120 percent by value. Crude import costs were 9.2 percent higher.

But while Nagai at Barclays expects the negative trade balances to continue, he said exports were likely to start picking up "in a few months", catching up on growth in imports and eventually reversing the overall deficit.

"We believe the U.S. economy will gain steam first, which will then help shore up Asia's slowing economy," he said. "A recovery in the European economy is likely to come last, probably in late 2012 or early 2013."

Credit Suisse said January's huge deficit suggested Japan will also incur a record deficit on the current account, which measures not only merchandise trade but services and investment returns.

"We expect the trade balance to remain in deficit by approximately 500 billion yen per month (seasonally adjusted) in the first half of 2012," economists at Credit Suisse said in a report.

However, it kept its outlook at negative saying a plan to raise sales tax may boost revenues but "would not solve the country’s structural problems, which include shrinking nominal (gross domestic product) and increasing costs of social security".