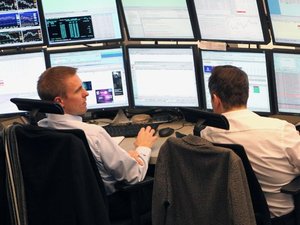 European stock markets rose on Monday on growing signs that a new bailout for Greece will be finalized at last, and sentiment was also soothed by Chinese moves to loosen bank lending.

The European single currency advanced to $1.3215, compared with $1.3141 in New York late on Friday, gaining ground as investors became more willing to take risks. U.S. markets will remain shut for a public holiday.

"The markets certainly think that the odds are good, given the way they have front run a possible outcome over the last few days as the euro and equity markets have continued to rise."

Eurozone finance ministers meet yet again on Monday on Greek debt, and this time seems to have tightened the corset of conditions tightly enough to approve a massive rescue and avert imminent default.

Greek Prime Minister Lucas Papademos flew into Brussels to join the talks among eurozone finance ministers and secure a 130-billion-euro ($171 billion) bailout and a writedown on privately-held debt worth 100 billion euros.

"We have all the elements for an accord," French Finance Minister Francois Baroin told Europe 1 radio ahead of the 3:30 (1430 GMT) talks. "That is what I will argue as finance minister this evening."

The negotiations have lasted for six months and have been on a knife edge in the last few weeks, with Greece appearing to totter between a rescue and even eviction from the Eurozone.

Most analysts consider that if Greece were to default, the consequences for the Greek people would be catastrophic, but possibly not now so dangerous for the rest of the Eurozone as would have been the case last year.

The bond swap with private investors would be launched on Wednesday, right on time for Athens as it faces debt repayments of about 14.5 billion euros on March 20.

"Progress out of Greece over the weekend has been the primary driver of the latest round of risk-on trade," said analyst Joel Kruger at trading website DailyFX.

"Today's Eurogroup meeting should therefore be an important moment for the process and help to at least get this saga somewhat out of the way."

"Overall, Monday's session of trade should be taken with a grain of salt as more time is needed to see how things play out with Greece," added Kruger.

"The US markets are also closed for the long holiday weekend which makes the price action even less reliable. We would therefore recommend proceeding with caution."

Asian shares mostly rose earlier on Monday, also driven by a Chinese move at the weekend to loosen lending.

The move, the second since November, comes as Beijing looks to ease restrictions put in place to curb surging inflation and property prices amid fears that the Asian powerhouse economy is slowing too quickly.

"China continues to be a big driver behind sentiment and appetite towards risk as the world's second-biggest economy remains critical to the future of global growth and expectations," added Capital Spreads boss Simon Denham.

"The authorities there are as desperate as everyone else to try and avoid a major meltdown or 'hard landing' of their economy, so actions like this will help in avoiding a crash."

However, Sydney increased by 1.4 percent, with energy and mining stocks gaining on hopes Beijing's decision would spur demand for commodities.

Tokyo shrugged off a record monthly trade deficit of 1.475 trillion yen to close with the Nikkei 225 index up 1.08 percent.

And Bangkok rose 0.71 percent, despite news that Thailand reported a huge 10.7-percent quarter-on-quarter fall in GDP for the October-December period last year, when the country was hit by devastating floods.