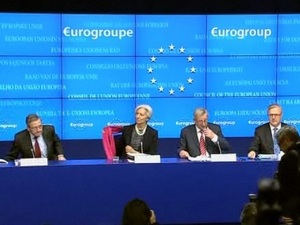 Eurozone finance ministers sealed a deal for a massive new bailout of Greece in the early hours of Tuesday, several sources said.

"We have the essentials of the deal," a European Union official said, indicating it covered both a write-down of Greek sovereign debt held by private creditors and a package of guarantees and loans also being put up by Eurozone governments.

The euro immediately jumped against the dollar in Asian trading after finance ministers gave their green light to a 230-billion-euro ($300 billion) financial lifeline, in exchange for strict surveillance of the Athens government over coming years.

The deal came after 12 hours of tense talks in Brussels, that saw Greek Prime Minister Lucas Papademos -- a former European Central Bank No. 2 -- act as go-between for ministers with negotiators for private creditors.

The deal will bring government debt in Athens down to "120.5 percent" of gross domestic product (GDP) by 2020, a Eurozone governmental source also told Agence France Presse.

This is just a fraction above the 120-percent target set by the European Union and International Monetary Fund, and means a 5.5-billion-euro gap in funding was reached to bring it down from an estimated 129 percent according to the latest analysis by international creditors.

Sources earlier said that banks were readying to up their write-down by several percentage points, from the 50-percent "haircut" initially agreed by Eurozone leaders in October.

National Eurozone central banks also agreed to engage in their own write-down of Greek bonds.