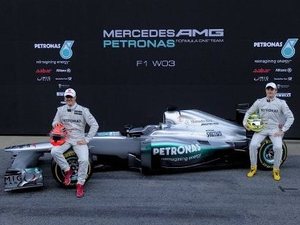 Mercedes on Tuesday unveiled their new WO3 car which they hope will allow them to claw their way back to the level of the top trio, Red Bull, McLaren, and Ferrari, after a bitterly disappointing 2011.

The German team had to settle for fourth place in the constructors' championship last year with drivers Nico Rosberg and Formula One great Michael Schumacher slumping to seventh and eighth.

What followed after November was a revamp of the technical team with big names Bob Bell, Aldo Costa and Geoff Willis all arriving and helping raise expectations.

"The F1 W03 is a car I believe, and hope, our team can be proud of, and which will deliver the on-track results that everybody has worked so hard to achieve, said team principal Ross Brawn.

"Notwithstanding the distinctive nose design, which is certainly an acquired taste, the car is an elegant interpretation of the current regulations, and a clear step forward over its predecessor in terms of detail design and sophistication.

"Last year we produced a very bold car and, although its more radical elements didn't always deliver the results we had hoped for, the experience we gained has been invaluable to the design of the 2012 car.

"This car is also a more integrated package, and demonstrates that our Silver Arrows works team is taking the next step forward in terms of on-track performance."

The new car has already been tested in the opening winter tests at Jerez earlier this month and will get a second run here this week ahead of the year's opening Grand Prix in Australia on March 18.

Rosberg said that he felt confident that the changes made to the car will reap benefits over the course of the season.

"It looks good, and is very nicely packaged under the bodywork. All the parts are in harmony, which reflects how well the different departments of our team are working together.

"From the beginning of our running, we have been able to focus on understanding the car and making good progress with our test program.

"It will be very interesting to learn more about where we stand in the next few weeks."

Seven-times former world champion Schumacher, 43, has had a disappointing time of it since coming out of retirement two years ago.

But ahead of the new season the German appears to have gained in confidence.

"I have done quite a few roll-outs and launches of new cars, but even after all these years, I must say it still feels special.

"Days like this are precious moments, as they are always filled with hope and anticipation," said Schumacher.

"Already last week, when we drove the car for the very first time, it instantly gave us good feedback and sensations.

"Starting today, we will work intensively to make it a competitive runner.

"For my part I am eager to fight again, I am looking forward to the new season, and I can't wait for it to begin."