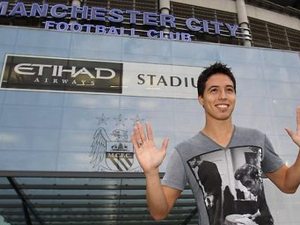 Samir Nasri is confident he is starting to prove that Manchester City did not make a mistake when they signed him for £24 million from Arsenal last summer.

The Frenchman, 24, has taken time to settle at Eastlands and has made just 15 Premier League starts since his move.

City manager Roberto Mancini has claimed that Nasri needed to improve the defensive side of his game in order to thrive for the Blues.

But Nasri has started to establish himself in recent weeks as City close in on the climax to the Premier League and the Europa League.

The winger maintains he was never concerned about his price tag but accepts it has taken time for him to get used to life at City.

He claims he has taken Mancini's advice on board and feels he is starting to show the club what he is capable of.

"It's always tough when you change, when you go to another team and have to be involved 100 per cent and I wasn't," he said. "Now I start to be settled and you will see a better Samir every week.

"You have to work when you don't feel well and not producing what everyone expects. I was always confident about my quality and you will see that.

"What you want to do is to give something to the team and the people who bring you here and trust you. The money and everything isn't my problem.

"It's not the same way (as playing at Arsenal). You need to settle. Now I want to show everyone it wasn't a mistake."

Nasri's former club Arsenal are struggling to press for a top-four place, out of the FA Cup and 4-0 down in their Champions League tie with AC Milan.

He is adamant he has never doubted his decision to leave the Emirates Stadium but is sure that Arsene Wenger will turn it around.

Nasri added: "I don't want Arsenal to fall down. I want for them to win the FA Cup or something because I have respect for the players and the manager.

"I know from the start that I made the right choice. Sometimes it's good to win ugly you don't always have to play good football to win.

"Arsenal play good football but after seven years they don't win so that's difficult for them but they have a good philosophy. I know they'll find some solution."