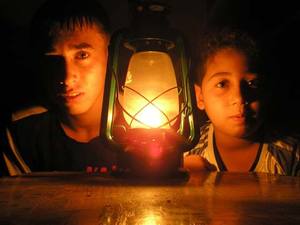 Egypt is to provide 22 megawatts of electricity to the Israeli-blockaded Gaza Strip, where the sole power plant has shut down after running out of fuel, the electricity minister said on Tuesday.

Egypt "will begin boosting the Gaza Strip with around 22 megawatts of electricity at the start of next week, to confront the crisis there and ease the suffering of the Palestinian people," Hassan Yunes said.

He said the move was part of a larger plan that would see the impoverished strip connected to a regional grid.

The power plant, which supplies around a third of Gaza's electricity, suffers frequent outages, leading to daily blackouts across the Hamas-run territory.

According to the U.N. agency for humanitarian affairs, OCHA, the amount of fuel being transported through tunnels from Egypt to Gaza has dropped by half over the past fortnight, reportedly due to increased restrictions on the movement of fuel by Egyptian police.

Gaza's Hamas prime minister Ismail Haniya also urged Egypt to help, issuing a statement calling on Cairo to "immediately intervene and meet all the electricity needs of Gaza in a permanent way," warning that the territory was facing a "real humanitarian crisis."

Oxfam warned that the diminished fuel supplies to Gaza were "inching" it "towards a total collapse of essential services," and said that only an end to the blockade on the Hamas-run territory would solve its electricity's shortage.

Israel imposed a blockade on the Gaza Strip in 2006 following the capture of one of its soldiers in June that year.

The blockade was tightened a year later after Hamas's forcible takeover of the territory, and Israel began restricting the amounts of fuel allowed through the crossings.