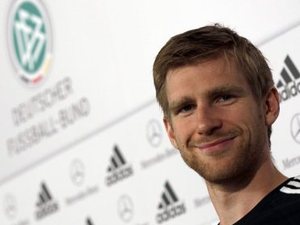 Germany's Arsenal defender Per Mertesacker said Tuesday he is confident of being fit to play at this June's European Championships despite having an operation to repair torn ankle ligaments.

The 27-year-old center back damaged his ankle in the Gunners' Premier League match against Sunderland on February 11, which left Arsenal manager Arsene Wenger saying he would be out for a 'long time'.

But after a successful operation, the Germany star has said he is confident of making the squad for Euro 2012, to be hosted by the Ukraine and Poland, which starts on June 8.

"The Euro is not in danger," said Mertesacker, who did not say when he would be able to return to play for Arsenal.

"I had surgery last night and a piece of bone has been reattached to the ankle, as have the ligaments.

"All's gone well, and I am already in rehab."

Having won 79 caps for Germany, Mertesacker is the cornerstone of the German defense and joined Arsenal in August 2011.

Joachim Loew-coached Germany host France in Bremen on February 29 in their final friendly before naming their 23-man squad in May.

Germany have drawn Portugal, the Netherlands, and Denmark in Group B of Euro 2012.