Israel’s Deputy PM Hopes Camp of Radicals, Including Hizbullah, will be Defeated 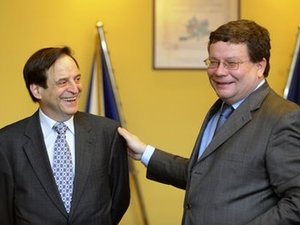 Israel's deputy Prime Minister, Dan Meridor, has hoped that “the camp of the radicals” that includes Hizbullah would be defeated in the region.

Dan Meridor, who is also Minister of Intelligence and Atomic Energy, told The Associated Press in a telephone interview from Prague that Egyptian protesters' demands for freedom and free election were positive.

"What we saw in Egypt is a unique development," Meridor said. "The slogans in the square were mostly from the western dictionary, not from the Muslim dictionary. They were about freedom, about liberties, about free elections, so they were positive."

Israel hopes that the current developments will weaken the radical forces in the region, he said.

Meridor was in Prague to meet Czech leaders, including Foreign Minister Karel Schwarzenberg. The Czech Republic is one of the strongest EU allies of Israel.(AP-Naharnet)