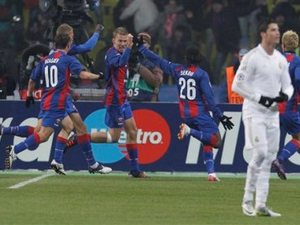 CSKA Moscow equalized from the last kick of the match when Pontus Wernbloom scrambled the ball into the net, giving the Russian club a 1-1 draw against Real Madrid in the last 16 of the Champions League on Tuesday.

The Swedish midfielder's debut game for CSKA ended with him poking the ball home in the third minute of stoppage time in the first leg at Luzhniki Stadium.

Madrid had won all previous six matches in the competition this season and it was the first away goal conceded this campaign.

Wernbloom's goal came after CSKA missed several opportunities following Cristiano Ronaldo's 28th-minute goal, which appeared to have the put the visitors on course for victory in a match played in subzero temperatures and on artificial turf.

Ronaldo scored his 36th goal of the season after CSKA had failed to clear Fabio Coentrao's cross from the left, the ball bouncing for the Portugal forward to strike a left-footed shot into the net.

"Our opponents were tough and the match was hard," Madrid coach Jose Mourinho said. "Our opponents did very little to score but got their goal. They were very happy to get that. We had our chances, especially in the second half, but we didn't convert them. In the end ... I'm satisfied with the result."

The return leg at the Santiago Bernabeu stadium in Madrid is on March 14.

Initially, CSKA goalkeeper Sergei Chepchugov kept his side in the contest with Madrid's poor finishing ruining a number of chances. It was the hosts' first competitive match this year with the Russian league starting on March 3, and their lack of fluency showed compared to the familiarity displayed by Madrid's players.

Madrid had to be patient to begin with, CSKA midfielder Alan Dzagoev volleying Georgi Schennikov's cross wide in the seventh minute.

Madrid's defense snuffed out many of CSKA's attacks, and the visitors went down the other end to score when Coentrao found Ronaldo and a failed headed clearance allowed the Portugal striker to smash a shot under Chepchugov.

CSKA striker Seydou Doumbia headed a good chance wide just before the break, and while the hosts continued to create after the restart, it was Madrid that looked closer to scoring.

CSKA had its share of chances. CSKA winger Ahmed Musa broke away in the 62nd but his poor effort was easily held by goalkeeper Iker Casillas, while Dzagoev then missed Sekou Oliseh's well-placed cross.

But Madrid paid for its failure to put the game away. Chepchugov saved Sergio Ramos' header in the 76th, before an unmarked Ronaldo inside the area rolled his shot just wide of the post with the goalkeeper beaten.

"It was great to get the injury-time goal and it really gives us a chance going into the second leg," CSKA coach Leonid Slutsky said. "Wernbloom is the hero with the goal, of course. But he played a good defensive game on the whole."