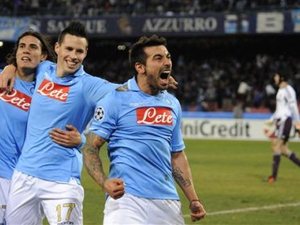 Ezequiel Lavezzi and Edinson Cavani again dampened English hopes by leading Napoli to a 3-1 win over Chelsea in an entertaining first leg of their Champions League last-16 matchup.

Cavani, who struck a brace against Manchester City to eliminate the Premier League leaders in the group stage, was again in inspirational form as he gave Napoli the lead at halftime, before setting up Lavezzi's second in the 65th minute.

Lavezzi had earlier scored with a curling shot to equalize after Juan Mata gave Chelsea a surprise lead following a mistake by Napoli captain Paolo Cannavaro.

It is Chelsea's fifth match without a win and means there is likely to be no English team in the quarterfinals after Arsenal lost 4-0 at AC Milan last week.

Only three teams have come back from two goals down in a second leg.

"I want to be the fourth," Chelsea coach Andre Villas-Boas said. "We're sure we can turn it around at the Bridge because of the chances we had tonight. Being clinical in front of the goal was the difference between the two teams. Napoli was efficient in front of goal and we weren't. We made a couple of mistakes and Napoli took advantage of those opportunities."

Chelsea was without captain John Terry, and the club announced before kickoff that the defender needs knee surgery and will be out for up to six weeks. Terry's absence told as Napoli breached the Chelsea defense time and time again.

"We have to focus on reorganizing the relationship between the back four," Villas-Boas said. "We have to solve these issues at the back so we can profit more from the opportunities we have. ... The first two goals we had more numbers back, and if we were more organized they wouldn't have scored."

It could have been even worse for Chelsea as Napoli wasted several opportunities to extend its advantage, most notably when Ashley Cole cleared Christian Maggio's close-range shot off the line.

"It is a pity that we didn't get the fourth, with Maggio's chance," Napoli coach Walter Mazzarri said. "That would have helped us and we would have been more calm going to London. Chelsea was strong, as we knew they'd be. We were great, especially up front and in reacting to Chelsea going ahead. We had a difficult 15 minutes but then we equalized and grew from there.

"Napoli had great chances tonight but it won't be easy in London. Chelsea are capable of scoring two goals at home so we have to take our opportunities. There's the great disappointment not to have scored a fourth, we had so many chances to and we deserved to."