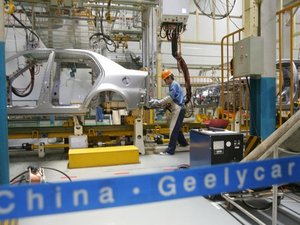 Chinese automaker Geely said Wednesday it will begin assembling cars in Egypt this year with a local partner, marking its latest push overseas as domestic demand hits the brakes.

Geely Holding Group, which owns Swedish nameplate Volvo, will work with GB Auto to assemble passenger vehicles for distribution across North Africa, the Chinese company said in a statement.

The production line will have an initial capacity of 30,000 units a year, the statement said. Financial details were not provided.

The move highlights the growing global ambitions of Chinese automakers such as Geely, which bought Volvo from US auto giant Ford in 2010 for $1.5 billion, less than a quarter of what Ford paid for the company in 1999.

Geely said in December that it was aiming to start selling its Emgrand EC7 sedan through a network of 30-40 dealerships around Britain by the end of this year, as it seeks to boost its presence in developed markets.

It also operates assembly plants in several countries including Russia and Indonesia.

Great Wall Motor on Tuesday became the first Chinese automaker to open an assembly plant in Europe, aiming to produce 50,000 vehicles per year for the whole continent in northern Bulgaria.

The overseas push by Chinese companies comes as sales in the world's biggest auto market hit the brakes after Beijing rolled back sales incentives and some cities imposed tough restrictions on car numbers to ease traffic congestion and pollution.

Interesting the Chinese are on the attack ...