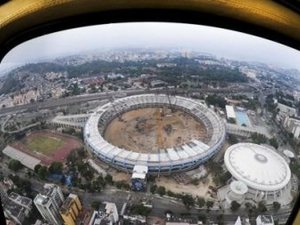 It wasn't a tough choice for convicted bank robber Chiquinho: spend the day in a cell or make money out in the sun helping Brazil build a 2014 World Cup stadium.

Former slave worker Nivaldo Inacio da Silva had another easy decision to make: pick cotton for about $2 a day or make eight times as much as a bricklayer at another World Cup venue.

The two are relishing their role in helping tournament preparations that have otherwise invoked widespread criticism over allegations of overspending and misuse of public funds.

Silva and Chiquinho, who full name is Francisco das Chagas Queiroz, are some of those already being positively affected by the World Cup, getting the opportunity of a lifetime because Brazil will host football's showcase event.

They are part of programs which help those with few opportunities in the job market and take advantage of the World Cup to give them a better chance.

"This is the best thing that has ever happened to me," the 52-year-old Chiquinho told The Associated Press in a telephone interview. "This type of work gives us dignity, it gives us something to look forward to in the future. If we do a good job here, maybe the company will want to stay with us after we are set free."

Chiquinho has been in prison since the 1980s after being convicted of bank robbery in the state of Minas Gerais. He will be eligible for parole later this year, in part because his sentence has been gradually reduced thanks to his work helping renovate the Mineirao stadium in Belo Horizonte.

Chiquinho works as a cleaning supervisor at the Mineirao, where other two dozen prisoners are getting the same opportunity to get out of prison and work. In addition to placing them into the work force, the program by Brazil's National Council of Justice also offers training courses to further facilitate their access to the job market after they leave prison.

It has already helped more than 2,200 prisoners across the country, and currently 59 are working in some of the 12 World Cup stadiums.

Chiquinho and the other prisoners wake up at 4 a.m. every weekday to make a two-hour trip from their penitentiary to Mineirao, working until late in the day before returning. But there is no complaining.

About 1,600 kilometers (1,000 miles) away in the western city of Cuiaba, former slave worker Silva is also appreciating the chance he's gotten largely thanks to the World Cup.

He was lured into working at a cotton farm under conditions the Brazilian government describe as slave labor. Many times he had to sleep in the fields, didn't have access to a bathroom or clean water and was given food only sporadically. Silva said he had to pick cotton and clean fields for two days to get a payment.

But when Silva and about a dozen other colleagues were rescued from the farm — after one of them escaped and alerted authorities — they were immediately enrolled in a program created by the labor ministry of Mato Grosso state that trained and prepared such workers to find decent jobs in the region.

Silva got a chance to help build the Arena Pantanal, which will host four World Cup matches.

"We talked to the consortium of companies building the stadium and convinced them that they could be using these workers after they were properly trained," said Valdiney Arruda, who is in charge of the labor ministry program. "They knew it was a good opportunity and opened up spots for them. These workers studied and now they have good housing and eat properly thanks to this."

Silva is one of 25 former labor slaves now working at the Arena Pantanal. He started as an assistant bricklayer, making more money than he had ever made in life, and is already getting trained to find a better-paying position in the near future.

"My life is completely different now," the 44-year-old Silva told the AP. "A lot has changed. Now I'm making some good money, I'm really happy. I'm helping build one of these stadiums and hopefully one day I'll be able to show it to my children."

The companies using the former slaves said it was an easy decision to accept these workers, because the civil construction sector is struggling to attract labor.

"Because of this program, they will be able to continue working in civil construction in the future," said Simone Ponce, a spokeswoman for the Santa Barbara and Mendes Junior consortium. "The social legacy will be tremendous."