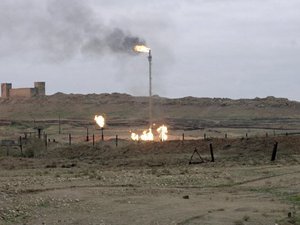 Iraq is mulling options to boost oil exports through Turkey or to reopen disused pipelines in case Iran blocks the strategic Strait of Hormuz as threatened, the planning minister said on Wednesday.

Iran has threatened retaliation for fresh Western sanctions over its nuclear program, including a possible disruption of shipping through the Strait of Hormuz, a Gulf chokepoint for global oil shipments.

"Government committees have been formed in Iraq" and have discussed options "if, God forbid, the Strait of Hormuz is closed," Planning Minister Ali Yusuf al-Shukri told a news conference in Baghdad.

The vast majority of Iraq's oil is exported from terminals in the northern Gulf and passes through the Strait.

One option is increasing exports through a pipeline that runs into Turkey to one million barrels per day (bpd), from the current figure of 400 to 450,000 bpd, he said.

"We also discussed with the Lebanese and Syrian sides activating the Baniyas-Tripoli pipeline," which has been closed since 1990, he said.

He said another proposal submitted to the Iraqi cabinet was to reopen a long-disused pipeline to Saudi Arabia, though this idea had not yet been broached with Riyadh.

Iraqi government spokesman Ali al-Dabbagh told Agence France Presse in an interview earlier this month his country was worried by U.S.-Iran tensions and would be one of the worst affected if the Strait of Hormuz was closed to shipments of crude oil.

"Unfortunately, Iraq till now did not build up the infrastructure which could diversify the export of oil. Till now the pipeline with Syria is not operative, the pipeline with Turkey is still in low capacity," he said.

"Definitely, we urge both Iran and the United States to... solve the problems in a good way," Dabbagh said.