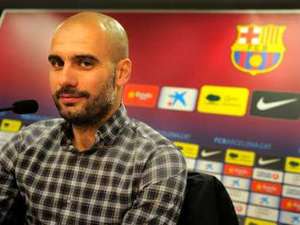 Barcelona defender Daniel Alves joined the chorus of supporters pressuring coach Pep Guardiola to stay on at the European champions, who risk slipping into decline if he leaves.

Alves stated that he expects Guardiola to sign a contract extension with the three-time defending Spanish champions because "without him we are nothing."

Alves said: "If he goes, Barca will likely go into decline."

Guardiola had agreed to one-year extensions by this point of the season the last two seasons but has so far delayed signing an extension.

Since taking over the coaching duties, Barcelona has won 13 of a possible 16 trophies including a pair of Champions League and Club World Cup titles.