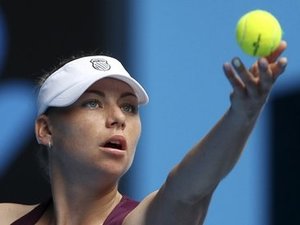 Vera Zvonareva, the Russian who came within a couple of wins of becoming a surprise year-end world number one, continued her bid to reach the pinnacle with a fine start to the two-million-dollar Dubai Open.

Zvonareva overcame Roberta Vinci 6-3, 6-1, finishing the second round match with such panache that she reduced the capable top 40 Italian to an unexpectedly pedestrian second best.

Her performance was characterized by ground strokes which were so beautifully timed that they created unobtrusive pressure, arriving upon Vinci earlier than anticipated without being powerfully struck.

"I had a great year last year, but I have to look forward," said Zvonareva, who reached the Wimbledon and U.S. Open finals in 2010.

"I'm pleased to have started so well because it's never easy to do that. Every week has different balls and different courts and it's difficult to play your best tennis at first. Here the ball feels light."

Zvonareva was certainly doing that by the end of the match. She concluded the penultimate game with an ace from a second serve, and started the last game with a sideways scuttle at such speed that she was able to rifle an improbable running backhand winner down the line like a magnetic bullet.

If she can maintain such form in tougher tests to come, it should confirm her as a front runner for a title for which Caroline Wozniacki is top seed.

It was less of a surprise, having seen what good physical shape Zvonareva appears to be in, to hear that she is a little struggling with her second degree, international economic relations at the Diplomatic Academy of the Russian Ministry of Foreign Affairs.

"I am trying to improve myself as a person as well as a tennis player, but it is not easy," she said. "I am working on a thesis and I admit I haven't touched a book for a week. It's very bad."

Her tennis isn't however. She next plays the winner of Alisa Kleybanova, her compatriot, and Jarmila Groth of Australia, and could go on to a quarter-final with Victoria Azarenka, the seventh seeded Belarussian.

Later Shahar Peer, the first Israeli woman ever to compete in the UAE, again overcame the heavy security and a good opponent.

Peer, who produced a stunning run to the semi-finals last year, now reached the last 16 with her second win, a 6-4, 6-2 success against Alexandra Dulgheru, an improving top 30 Romanian.

Peer will next play the winner of Li Na, the Australian Open finalist from China, and Yanina Wickmayer, now the second best Belgian again following the retirement of Justine Henin.