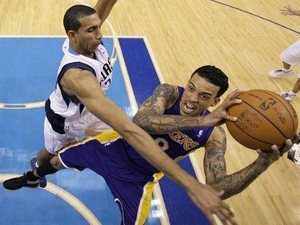 Andrew Bynum had a huge smile on his face after he grabbed a rebound of his own miss and got fouled on an attempted putback.

Not long after making both those free throws that put the Los Angeles Lakers ahead to stay, Bynum was running after teammate Derek Fisher to give him a big hug following a 3-pointer.

Bynum had 19 points and 14 rebounds, including several big plays in the final five and a half minutes, as the Lakers hit the halfway point of their season with a 96-91 victory over the defending NBA champion Dallas Mavericks on Wednesday night.

After the Mavericks failed to take advantage of a turnover by Kobe Bryant when Jason Terry gave it right back, Bynum was underneath the basket with the ball. But he instead passed it to Fisher in the left corner for a 3-pointer. Bynum was smiling broadly when he chased down and hugged Fisher when Dallas called timeout.

Fisher, whose driving short jumper with 3:41 left ended a 9-0 run and made it 89-82, had given Bynum a pep talk before the game. They were also thinking about the playoffs against Dallas last season.

"We got swept last year, and it was on our minds," Bynum said.

There was also Bynum's alley-oop dunk from Bryant with 1:05 left that stretched the lead to 93-86. The Lakers then held on despite missing six consecutive free throws after that.

"I'm a little overweight, I'm too young to have a heart attack," Brown said after watching all those misses.

But Matt Barnes grabbed the rebound after Gasol's second miss and was quickly fouled himself. He ended the Lakers' charity-line slump with two free throws.

"That was big," Fisher said. "The way last season ended, this game was big for a lot of us."

Gasol had 24 points for the Lakers, while Bryant and Fisher each had 15. Bryant shot 4 of 15 while being held 14 below his NBA-leading scoring average, and was scoreless until two free throws with 10 seconds left in the first quarter.

Nowitzki had 25 points and 12 rebounds to lead the Mavericks (21-13), who played their final game before the All-Star break after winning seven of their previous eight games. Vince Carter had 20.

"I'm disappointing tonight, I'm not dismayed," coach Rick Carlisle said. "Our effort was there, we just didn't make enough plays at both ends. ... The break's coming at a good time."

The Lakers have one more game before the All-Star break. They play Thursday night at Oklahoma City.

Lamar Odom missed the game for the Mavericks against his former team. Odom was the NBA's Sixth Man of the Year for the Lakers last season and won three NBA championship rings in seven years in Los Angeles.

Carlisle said Odom was excused from the game to attend to a family matter and will rejoin the team after the All-Star break.

The Lakers had their biggest lead when Steve Blake had a steal and passed ahead to Gasol for a running one-handed slam that made it 42-28 with 6:21 left in the first half. That ended 12 consecutive points and a 17-2 Los Angeles run.

"I was aggressive in the beginning. I was able to knock down some shots and make plays," Gasol said. "(This win) shows we're on the same page and we've got a lot of character."

Nowitzki scored the last six Dallas points, two free throws with 1:23 left and then a pair of jumpers in the final 42 seconds. He made a 15-foot floater and after grabbing a long rebound of a miss by Gasol, Nowitzki made a tying jumper.

"It just seemed like we'd get a little momentum and then we had trouble sustaining," Carlisle said. "Tough game, but you've got to give them credit."