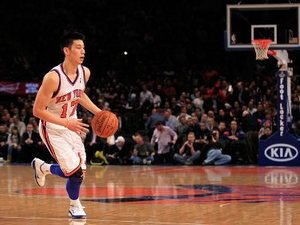 Jeremy Lin scored 17 points and added nine assists to spark the New York Knicks over Atlanta 99-82, improving the team to 9-2 since the Asian-American star emerged from a reserve role.

The 23-year-old point guard whose parents are from Taiwan had been cut by two other NBA clubs, but was given a chance when the Knicks lost two starters and produced record scoring and assist figures to ignite a struggling club.

Steve Novak added 17 points for the Knicks while Landry Fields added 16 and Carmelo Anthony contributed 15 points as the Knicks improved to 17-17 entering a Thursday matchup at Miami against the NBA co-leading Heat.

With J.R. Smith just signed after spending the early part of the season in China and Anthony back from an injury, the Knicks have started to come together, with Lin adding punch with timely passing as well as scoring.

"We have a lot of offensive weapons now," Lin said. "I don't need to shoot as much with these guys coming back. We have J.R. and 'Melo back. We're going to move the ball and make the defenses pay."

"They are so quick and athletic," Lin said. "We need to make sure we try to get into the paint instead of just move the ball around the 3-point line.

"It's a big game. It will be a good evaluation of where we are at. Besides that, we're just going to try to stay consistent. We don't want to get too high against elite teams and lose that energy against teams with weaker records."

Lin is averaging 23.9 points and 9.0 assists a game, the best showing by any player in his first 10 starts since 1976. But his "Lin-sanity" magic will face a man-to-man test against superstar James.

"LeBron is a great player and great, great defender," Lin said. "I've got to just continue to be aggressive and not change anything."

Anthony has given Lin some advice on how to deal with James.

"Melo definitely has given me a ton of advice. He has definitely taken me under his wing," Lin said. "We're going to need Melo to be a playmaker and a scorer tomorrow night."

Jeff Teague scored 18 points and Willie Green added 16 to lead the Hawks, who fell behind 60-35 at half-time and could not challenge in the second half, falling to 19-14.

"Our defense was good. Then we got sloppy," Knicks coach Mike D'Antoni said. "We still have a lot of guys out of synch. We're scratching out wins."

D'Antoni said he has done nothing special to prepare Lin for James.

"He will find out himself. He might as well experience it," D'Antoni said. "He will give him maximum respect if that matchup happens. Hopefully he will handle it and the Knicks will handle it.