Alonso: Ferrari Not yet Competitive 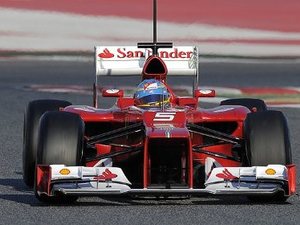 Former world champion Fernando Alonso admitted Ferrari have work to do if they are to compete for the Formula One title this season following testing in Barcelona on Wednesday.

Alonso was fourth fastest on the second day of testing, just behind current world champion Sebastian Vettel of Red Bull.

"We still have six days of testing and we will see how it goes.

"It's also hard to say how the others are doing: Red Bull is definitely very strong, as is normal in fact, given how they have gone over the past three years, but you can't say that McLaren or Mercedes for example, who seem to be behind, are not strong themselves, maybe even more so than Red Bull."

However, Alonso insisted that pre-season testing is not always the ideal indicator of genuine pace when the season begins.

"This has been a more laborious winter for us than in the past because we have a more complex car, which features very innovative ideas but that requires greater effort from everyone," added the Spaniard.

"From the drivers who drive it, the engineers who run and develop it and the mechanics who have to put in over 20-hour days. It's always nice to have a car that is immediately quick and reliable, but that is not always synonymous with winning.

"Last year, we did a race simulation at the end of the first test and then in Melbourne we were a second and a half off pole position."