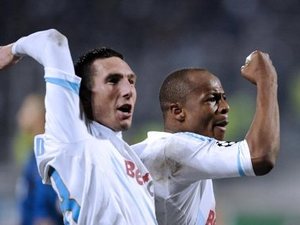 A dramatic 93rd-minute header from Andre Ayew gave Marseille a 1-0 victory over luckless Inter Milan in the first leg of their Champions League last 16 tie here on Wednesday.

Bidding to reach the last eight for the first time since they won the trophy in 1993, the hosts dominated possession but looked set for a night of frustration until Ayew's decisive intervention in the game's dying stages.

Having been eliminated by Manchester United at the same stage of last season's competition, Didier Deschamps' side will now travel to San Siro on March 13 with high hopes of reaching the quarterfinals.

"It was a well-balanced match and Inter were superior to what I've seen in recent weeks, which I expected," said the Marseille coach.

"We showed desire and determination. There were few chances. It was good for us to score at the end, because it could have been a draw.

"If we don't concede in the return leg, we'll go through, but that won't be enough. We'll try to score a goal, but in any case it will be a complicated match."

Inter, meanwhile, have now gone seven matches without victory and coach Claudio Ranieri will only face more questions about his future after this latest setback.

"We played a good match, in which we created more chances than them, and we didn't deserve to leave beaten," the Inter manager told Sky Sport.

"It's a shame to concede a goal from one of their only chances, but the match isn't over. There are still 90 minutes to go and, with a full stadium, a turnaround is possible."

After a watchful start, Inter began to carry a threat on the counter-attack and Steve Mandanda had to tip over a shot from Diego Forlan on 10 minutes after the Uruguayan met Esteban Cambiasso's cross with his right instep.

The Marseille goalkeeper also had to get down to block a low effort from Zarate, while Cambiasso saw a shot deflected into Mandanda's grasp shortly before the interval after another forward foray from midfield.

Marseille's poor delivery from wide areas meant that they struggled to bring Brandao into the game.

Cesar Azpilicueta sent a half-volley dipping onto the roof of Julio Cesar's net in the 19th minute, but OM's best chance of the half fell to Souleymane Diawara, who was unable to convert Mathieu Valbuena's inswinging free-kick.

Marseille bossed the opening of the second period and although they failed to create any clear chances, Ranieri was sufficiently perturbed to replace Zarate with the more conservative Joel Obi.

To the displeasure of the Velodrome crowd, the game became punctuated by niggly fouls and misplaced passes, and Deschamps responded by introducing young Ghana striker Jordan Ayew in place of Brandao.

Dejan Stankovic could only prod weakly at Mandanda after Sneijder's free-kick was glanced on by Forlan, before Andre Ayew nodded wide from Morgan Amalfitano's inviting center at the other end.

The elder Ayew sibling appeared to have taken it upon himself to break the deadlock, and after testing Julio Cesar with a header from another Amalfitano cross, he drew a corner with a rising drive from the edge of the box.

When Valbuena's resulting set-piece fell at the near post, Andre Ayew got across his man to head home, ending Julio Cesar's resistance and nudging the 2010 champions a step closer to the exit.