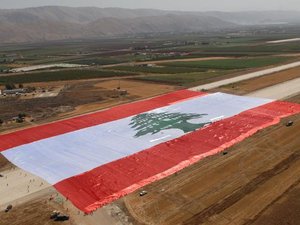 Having breezed through several world records in the culinary field Lebanon has now gone for the big one -- the world's largest national flag, and so huge it needed an airfield.

The Lebanese military on Sunday released a picture taken from the air of the massive flag, stitched in Kuwait, assembled in Lebanon and covering 65,000 square meters (645,600 square feet) "unfurled."

Morocco is the current holder of the Guinness world record for the largest flag, at a mere 60,000 square meters, a Lebanese military spokesman said.

Now Lebanon's bid for the title has been displayed at Riaq air base in the east of the country, in the presence of a representative of the "Guinness World Records" book.

The country's green cedar emblem in the flag's centre alone covers an area of 10,452 square meters, the same figure as the country's surface area in square kilometers.

Tiny Lebanon has both a troubled past and a history of setting the bar high in the record-breaking department.

It already holds records for the largest tabbouleh salad (more than three and a half tons, or 7,000 pounds) and has also served up a two-ton platter of the chickpea-based dip hummus.

Non-vegetarians are catered for as well: in August last year Lebanon gained an entry in the Guinness book for producing the largest ever kebbe -- a dish of minced meat and cracked wheat.

Now it would appear to have cracked the flag record too.(AFP)

Pathetic really...the biggest flag and the biggets hummos...is this the Lebanese excellence...? Is this the only pathetic way to promote our country...is this our pride...I feel sorry and sad...