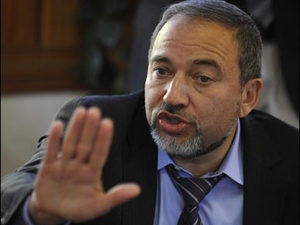 "Tonight two Iranian warships are supposed to cross the Suez Canal into the Mediterranean Sea on their way to Syria," Foreign Minister Avigdor Lieberman said, speaking at a conference of American Jewish leaders in Jerusalem.

Lieberman said Iranian warships cruising past Israel's coast was something that had not occurred for many years and was a "provocation that proves the self confidence and cheek of the Iranians is growing from day-to-day."

"To my sorrow the international community is not dealing with these repeated Iranian provocations," the hardline minister said, referring to a recent visit by Iranian President Mahmoud Ahmadinejad to the Lebanese border with Israel.

"The international community has to understand that Israel cannot ignore these provocations for eternity," Lieberman said.

Israel reportedly sent one of its submarines through the Suez in 2009 to take part in Red Sea military exercises that were interpreted as a warning to Iran.

The Suez Canal Authority said it had not yet been informed of an Iranian request to send its ships through the canal, but that it should not be a problem if they do.

"The Suez Canal authority allows all ships of any nationality to cross as long as the country is not in a state of war with Egypt," the Authority said in a statement, noting "it would be the first time Iranian warships have used the Suez Canal since 1979."

"The Suez Canal does not accept the Iranian currency, but that does not mean that Iranian ships cannot use the canal."

A powerful U.S. aircraft carrier, the USS Enterprise, passed through the canal in the other direction heading from the Mediterranean to the Red Sea earlier on Wednesday, witnesses and officials said.

But a spokesman for the U.S. Fifth Fleet told Agence France Presse the voyage was part of a long planned deployment to support the war in Afghanistan and was not related to tensions in Egypt or the wider Arab world.

The Tehran regime is seen by Israel as its principal threat after repeated predictions by its hardline President Ahmadinejad of the Jewish state's demise.

Israel also accuses Tehran of arming and funding Hizbullah in southern Lebanon and Hamas in Gaza.

Israel, which has the Middle East's sole if undeclared nuclear arsenal, suspects Iran of trying to develop atomic weapons under cover of a civilian nuclear program.

Tehran denies that charge and has accused Israel of trying to sabotage its civilian nuclear program and kill its nuclear scientists.

Israel has backed a U.S. policy of leading efforts at the U.N. Security Council for tougher sanctions against Iran while remaining open to dialogue.

But the Jewish state has refused to rule out a resort to military action to stop Iran developing a weapons capability.