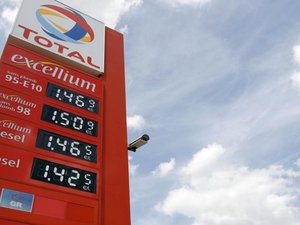 World oil prices surged to new nine-month highs on Thursday amid growing tensions over Iran's nuclear program and the Syrian government's deadly crackdown on the opposition.

New York's main contract, West Texas Intermediate (WTI) light sweet crude for April, jumped $1.55 to settle at $107.83 a barrel. It was its highest close since May 4.

"Geopolitical tensions in Iran and Syria continue to remain the main driver amid the uncertain macroeconomic conditions," Sokou said.

"In addition, there are... reports that Japan will seek to decrease imports of Iranian crude by up to 20 percent which should only serve to increase energy costs within the country as the world's third-largest crude importer."

"We are having a very strong finish of the day here," said Matt Smith at Summit Energy.

"Even though the inventories were not bullish at all, we have still seen a rally post the report," he said.

"It has more to do with risk appetite," he said, noting the positive German confidence number and another week of U.S. jobless claims trending lower.

The U.S. Department of Energy said that crude stockpiles jumped by 1.6 million barrels last week, more than three times the amount expected by most analysts.

"This (data) is consistent with beliefs that elevated prices are beginning to hurt demand," said GFT Markets analyst David Morrison.

Funny how the media gave little important to Iran cutting oil off Britain and France. The media said Iran provides only 3% of France's oil needs, and even less of Britain's needs. Then the prices sky rocket almost 10%! Imagine now if Iran cuts oil immediately to Italy, Spain, and Greece who actually use a lot of Iranian oil and have economies in severe recession.