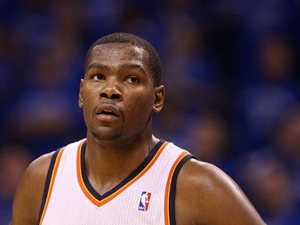 Kevin Durant scored 33 points to lead Oklahoma City to a 100-85 victory over the Los Angeles Lakers as the Thunder matched Miami for the best record in the NBA.

Russell Westbrook on Thursday added 19 points, James Harden had 16 and Serge Ibaka chipped in 11 points with 13 rebounds for the Thunder, who improved to 27-7 going into this weekend's All-Star break.

Durant, selected as a Western Conference starter for the All-Star exhibition in Orlando, Florida, on Sunday, also had six rebounds, four assists and three steals.

The Thunder seized a 46-43 half-time lead by scoring five points in less than one second before the interval.

After Westbrook made a three-pointer, Durant followed with a basket after stealing an inbounds pass from Andrew Bynum. The Thunder never surrendered the lead in the second half.

Kobe Bryant led the Lakers with 24 points. Ten of them came in the first quarter and he finished a disappointing seven-of-24 from the floor.