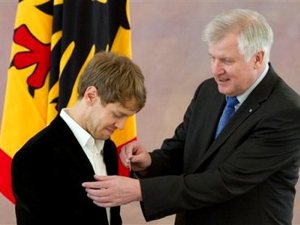 Two-time Formula One world champion Sebastian Vettel has been given Germany's highest honor for sporting achievement.

Horst Seehofer, Germany's acting president, praised the 24-year-old Vettel's "strength of character" as he presented the Red Bull driver with the Silver Laurel Leaf on Friday.

Seehofer told Vettel that "despite all the top places and trophies, you have remained down to earth and modest, and millions of fans appreciate that in you."

Vettel became the youngest F1 champion in 2010. He successfully defended his title with three races to spare last October.

He said: "You perhaps know that I like to collect cups or trophies, so this of course is something very special."