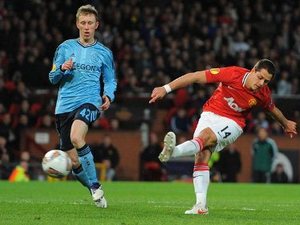 Manchester United squeezed through to the Europa League last 16 on Thursday despite losing 2-1 to Ajax at Old Trafford while former champions Atletico Madrid became Spain's third team in the next stage.

Sir Alex Ferguson's United went through 3-2 on aggregate and will face Athletic Bilbao in the next round.

Mexican star Javier Hernandez scored his 10th goal of the season after six minutes but Ajax threatened to spoil the party when Aras Ozbiliz leveled in the 37th minute and Toby Alderweireld headed a 87th-minute second leg winner.

"I've got to accept I'm responsible for picking the team and tonight I picked too many young players in the back four positions - that was a big problem in terms of experience. It was a big risk I took," admitted Ferguson.

"Ajax are fantastic in terms of keeping the ball. Their first goal I thought was a handball (in the build-up) but although they had a lot of possession they didn't look like scoring.

Valencia joined Bilbao and Atletico, who saw off Lazio 4-1 on aggregate, in the next round when a 1-0 win over Stoke City gave them a 2-0 aggregate win.

The Spanish side now face PSV Eindhoven, who should prove formidable opponents after a 4-1 hammering of Trabzonspor for a 6-2 aggregate over the Turks.

Athletic Bilbao had an arguably bigger challenge against Lokomotiv Moscow following a 2-1 defeat to the Russians in the first leg last week.

But their away goal in the Russian capital proved to be crucial as the Spaniards eked out a 1-0 win in Bilbao thanks to winger Iker Muniain's 62nd minute winner.

Belgians Standard Liege also had the away goals rule to thank for their qualification after a scoreless draw at home against Wisla Krakow, having drawn 1-1 in Poland last week.

They will now meet Hanover, after the Bundesliga side beat Club Brugge 1-0 in Belgium to secure a 3-1 aggregate victory.

Udinese turned on the firepower to escape potential disaster in Greece, the Italians scoring two first-half goals and adding a second after the break for a 3-0 away win against PAOK Salonika.

After Lazio's failed attempt to overturn their 3-1 first leg defeat to Atletico, Udinese remain the only Italian club in the competition.

Steaua Bucharest's dream of making it to the May 9 final in their own National Stadium was brought crashing down by a 1-0 defeat to FC Twente.

An opportunistic goal just before the half hour from Nacer Chadli was enough to send Steve McClaren's side through 2-0 on aggregate.

Klaas Jan Huntelaar scored a hat-trick including two goals in extra-time as Schalke nudged past Viktoria Plzen 3-1 and 4-2 on aggregate.

Schalke will tackle Twente in the next round.

On Wednesday Manchester City booked their last 16 place match-up with Portuguese side Sporting Lisbon thanks to a 4-0 second leg win over defending champions FC Porto.