Lin, Knicks Feel the Heat in Loss to Miami 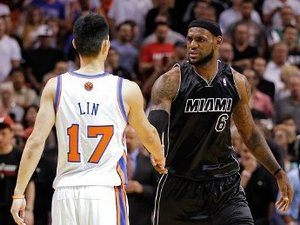 Newly-minted NBA star Jeremy Lin proved no match for Miami's "Big Three" as the Heat handed Lin and his New York Knicks a 102-88 defeat as the league heads into the All-Star break.

Meanwhile, Chris Bosh scored 25 points, Dwyane Wade scored 22 and LeBron James added 20 for the Heat, who won their eighth straight game and will take a league-leading 27-7 record into the All-Star weekend that starts on Friday.

"The speed and the athleticism... credit to them," Lin said. "Hopefully when we play them next time, it can be a different story."

Lin has been the NBA's biggest story this month, coming off the Knicks bench after being cut by two other clubs to put in the best performance of any NBA player in his first 10 starts since 1976.

Lin, whose parents are from Taiwan, became a phenomenon because of his scoring, averaging nearly 24 points a game, his passing skills and his clutch shooting ability, including a last-second game winner at Toronto.

Even President Barack Obama publicly expressed his regret that he wouldn't be able to extend his stay in Miami on Thursday to watch the Knicks and Lin take on the Heat's established stars.

Plenty of other celebrities were in attendance, including boxer Floyd Mayweather and filmmaker Spike Lee.

Lee scolded Mayweather earlier this month after the fighter complained that the buzz surrounding Lin was due to his Taiwanese and Chinese heritage, rather than his basketball skills.

"The atmosphere was great," said Miami center Joel Anthony. "We wanted to step up."

The Heat defense certainly did, forcing 15 turnovers in the first half and limiting New York to 4-of-15 shooting in the third quarter.

"I can't remember another game where it was hard just staying with my dribble," said Lin, who had three turnovers before he had even scored a point.

"I'm not going to hang my head or anything like that," he added. "I went out there and played hard. You can't win 'em all. You can't have a great game every time. At the same time, I need to see what I did wrong and how I can improve."

Both Norris Cole and Mario Chalmers stripped the ball from Lin for dunks in the first half.

"(We) wanted to make him uncomfortable," Chalmers said. "A lot of teams let him get comfortable and he picked them apart. We weren't going to let him do that."

"It's not a specific plan," Heat coach Erik Spoelstra said of Miami's strategy to neutralize Lin. "What we wanted to do was treat him with the adequate respect he deserves."

"We just wanted to come out and dominate the game," Bosh said. "When we're all three playing well, that kind of feeds energy on this team."

Lin wasn't the only Knicks player to struggle.

"We just probably played arguably the best team in the NBA," Knicks coach Mike D'Antoni said. "That set a bar to get up to."

D'Antoni also acknowledged the toll the intense scrutiny on Lin can exact.