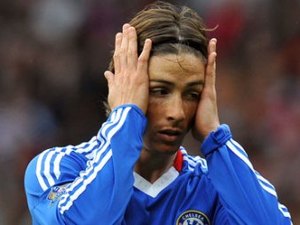 Struggling Chelsea striker Fernando Torres was dropped by World Cup champion Spain for the first time in more than five years on Friday.

Torres was missing from the squad announced by coach Vicente del Bosque for next week's international friendly against Venezuela.

Wednesday's game is the last before Del Bosque picks the squad that will defend Spain's title at the European Championship in Poland and Ukraine from June 8-July 1.

"Torres is not in good form and we believed in this case it was better if he didn't come," Del Bosque said on Friday. "But this doesn't mean anything. This is not a definitive list for Euro (2012)."

Torres has been a regular in Spain's team since 2004, with the Chelsea striker scoring the winning goal against Germany in the Euro 2008 final for Spain to win its first major trophy in 44 years.

The 27-year-old hadn't been dropped by his country since November 2006, but his last competitive goal for Spain came in September 2010. Torres, who has 27 goals in 91 appearances for Spain, hasn't scored for Chelsea since October.

As expected, Torres was replaced by Valencia striker Roberto Soldado and Athletic Bilbao forward Iker Muniain got his first call-up. The promising Spain Under-21 player was among four Bilbao players included in the squad alongside striker Fernando Llorente and defenders Javi Martinez and Andoni Iraiola.

"This list is a nod to Athletic and the young players coming up who can see that the national team is not an unrealistic possibility," Del Bosque said.

Del Bosque is expected to name his definitive Euro 2012 squad on May 15.

Thiago Alcantara was also included as Del Bosque picked four players from the country's Under-21 European Championship-winning team, and he hinted Atletico Madrid striker Adrian Lopez was also in the running with the team still waiting on the return of striker David Villa from a broken leg.

"The information we've received is good and positive and we hope he will be in playing conditions for the Euro," the former Real Madrid coach said of Villa. "We're happy with his recovery so far."

Barcelona dominated the list as expected, with seven players on the 24-man squad, and with Bilbao and Real Madrid having four players each.

Pedro's form has been irregular due to injuries, while Del Bosque included Xavi Hernandez despite the Barcelona playmaker having featured little over the last month due to a nagging Achilles injury.

Spain is looking to become the first team to defend its European title after winning the World Cup. It opens the tournament in Poland and Ukraine against Italy on June 10 before matches against fellow Group C rivals Ireland and Croatia.